Going out of your own personal comfort zone can be hard without a strong incentive to precipitate making that first move ahead.  I'm not usually alright with small amounts of clothing on myself out in public, so making a vintage bra top was a bit out of my comfort zone but it sounded incredibly fun and different at the same time.  Stephanie at "The Girl with the Star Spangled Heart" blog hosted a 'Vintage Playsuit Sew Along' this summer, and I jumped on board to join and challenge myself to sew some "fun in the sun" pieces. 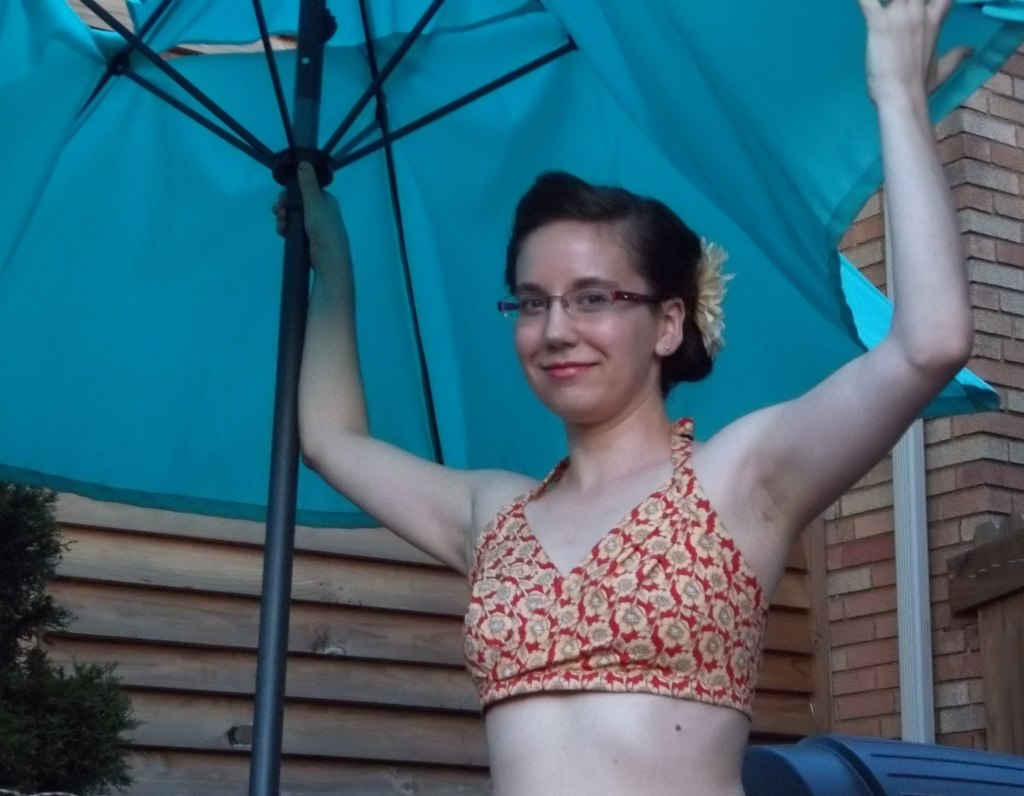 This small 50's bra top project is part one of playsuit set #2.  I used a brand spanking new Simplicity "Retro" re-issue (#1426) as my bra top pattern.  I had also planned on using another new Simplicity pattern (#1887) to make some contrasting linen shorts.  Along with my plan to make a matching tie front, belly skimming sleeveless blouse (from a vintage 1959 Simplicity 2999 pattern of mine) as a cover-up, all three pieces would together complete a playsuit.  However, like I've said before, sometimes life gets in the way of sewing...or is it the other way around???  The blouse pattern doesn't have fabric assigned to it yet, while the shorts are not even started, but at least I have a sand colored linen on hand, ready to be cut.  A future post will have to feature my entire 50s playsuit, hopefully this year or next year's summer at the latest.

My 50s bra top is for now the only piece of my future playsuit blogged about in this post.  It was such a fun, quick, and successful project that certainly makes for an unusual garment in my wardrobe.  Now I just need to find more places and reasons to get to wear it!

FABRIC:  I chose a printed 100% cotton for the fabric of my 50s bra top.  It has a deep red color in the background, with golden yellow flowers outlined in dark brown.  It was on "Spot the Dot" clearance at Hancock Fabrics.  The lining for the inner cups of my bra top is an oatmeal colored cotton batiste that came from my scrap bin in the basement.

NOTIONS:  All the notions I needed were on hand already:  interfacing, thread (same color that was used for my "Christmas, 1946" dress), elastic, hook and eyes, and two vintage buttons from Hubby's Grandmother's stash.

TIME TO COMPLETE:  Sewing time to make up this project was 4 or 5 hours, but it actually took a bit longer because I (oopsie!) mis-cut a few of the straps.  My bra top was finished on June 24, 2014. 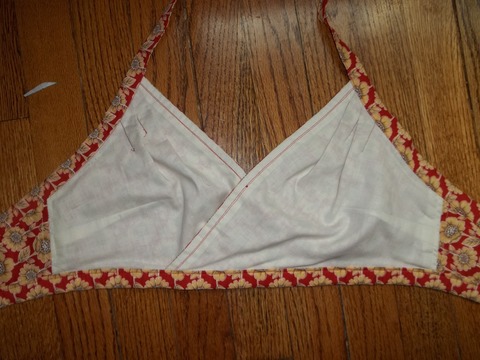 THE INSIDES:  So nice!  Following the pattern instructions gave me a wonderfully professional, cleanly finished project on which every seam is covered and enclosed (see left pic).  I love it!

TOTAL COST:  The pattern calls for less than a yard, and with my floral fabric being on clearance, together with all my supplies being on hand, my total cost is about $3.00.  How reasonable is that?!

As usual, I browsed through numerous reviews and blog posts from others who have made what I was going to attempt for myself.  Many ladies noted that the cups tend to run a bit big for view A, the one I chose, necessitating in pulling the neck ties too tight around one's neck to get a snug fit.  I wanted to avoid any such uncomfortableness, so I followed the advice of other seamstresses who have made more than one of Simplicity 1426's bra tops, and I cut my version in a size down for the cups.  I stayed true to my chest size for the rest of the bra top (the side/back bands, the bottom strap, and the neck straps), cutting those parts out two sizes up from the cups, which is bigger than my normal (according to modern 'Big 4' patterns) bust size.  When marking the side bust darts for the cup panels, I also downsized further by chalking out a size smaller than the cups, which was as small as the pattern could go.  Thus, for a total round up clarification, I did a size 6 side bust darts, size 8 cups, and a 12 for the rest of the pieces.  I was surprised at how all the differently sizes pieces fit so smoothly together and did, in fact make the perfect fit for my body.  The great fit of this bra top makes me want to make another version in swimsuit material, and also try to make some lingerie and underwear for myself when I need it...because a great fit is the most comfortable thing in the world to wear! 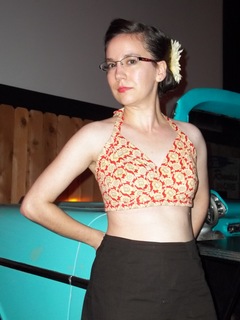 Interfacing was added to several pieces of my bra top upon my own intuition in order to make it more substantial.  I am very glad now for putting in the extra time and thought to interface even though the pattern does not say to do this step.  A light/medium interfacing went into the side/back panels as well as the bottom band, and I feel it really stabilizes the spots where the top might tend to wrinkle, droop, support, or otherwise hold the overall shape.  Interfacing does make the bottom band thicker than originally intended, but I just made sure to clip seams, take my time while stitching, and do a light ironing afterwards.  I almost wish I would have added seam tape to the inside of the bra top edges of the cups, but there is not too much stress on this seam compared to the parts which are interfaced, so, at this point, maybe I'm just nit-picking at my own creation (nothing new...).  What's good enough is good enough.

The back closure of my bra top is intended to be more forgiving, and more like a regular bra back than what the pattern calls for as finishing.  At the moment, I do not have access to any sewing machine w

ith a button hole maker, so making buttonholes was out.  I know, my mind thought, "hey, here's a reason to do hand-bound buttonholes...you have upholstery thread".  However, an easy project is not as easy anymore if you add in a time consuming technique that you don't really know if you'll like in the end anyway, I told myself.  So, I got to work sewing on two small gold elastic loops in lieu of button holes.  Hubby half-emptied out his Grandmother's button box to find these two creamy yellow/ivory buttons to match to the flowers in my printed cotton.  As an added precaution, I also stitched on two waistband hook-and-eyes to a vertical bar of elastic for a second closure.  Unhooked, and looking at the two ends (as in the left picture), my closure method kind of looks like overkill, but, it does still appear quite nice when together (see the right picture).  As long as it's what I like and feel comfortable with, that's all that matters.

What I find interesting about the pattern for my bra top, Simplicity 1426 is labeled 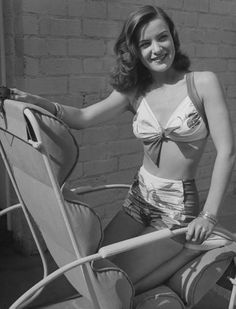 as 1950's vintage, but yet a simple Google search showed me a very interesting photo (at right) that reveals how this bra top styling actually began earlier than expected.  In July of 1943, Ella Raines, an American actress, posed for a picture in a playsuit with a top that looks very, very similar to the 'view A' which I made from Simplicity's re-issued pattern.

I had no idea as to how we could arrange a photo shoot similar to Ella Raines' vintage pool side picture, so most of our photo lounging around our backyard.  However, when we were out and about one evening, we took some extra photos of me for this post inside"Ronnie's" Wehrenberg movie theater.  Ronnie's theater is up the street from the my parent's house where I grew up, and from 1948 to 1983 it was a drive-in movie place, remarkable for its miniature train and pony rides which would circle around the playground at Ronnie’s, entertaining the small children in attendance.  The Wehrenberg family's theaters are very important to the local history of our town (as you can read here), with Ronnie's theater being especially important because it was named after, and later managed by, Ronald, the grandson of the Wehrenberg founder.

It took a number of years for the closed Ronnie's dive-in to be torn down and eventually turn into the mega complex of 20 movie screens that it is today.  I remember how, when I was quite little, my dad and I would walk up the street with my play plastic grocery cart and shovels and toy cars to play in the giant dirt pile leftover from what was the drive-in. (I guess this memory dates me a bit!)  My dad, in fact, was able to watch anything played at the drive-in from atop their house roof...that's where he saw some of the original "Star Wars" movies. 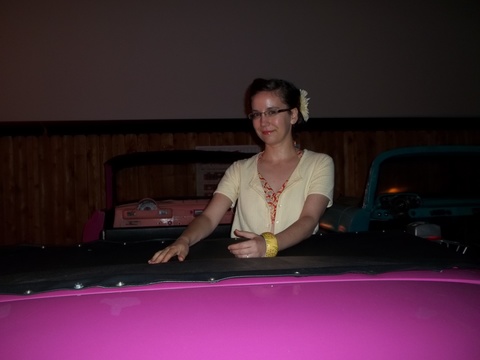 Anyway, putting my reminiscing aside, inside the modern Ronnie's there is still a sort of a drive-in retro style diner as seen in the background of some of our pictures (more here).  Twenty one real 1950's cars are halved and refitted to house a table and radio and booth seats where people can eat and watch sports games and vintage short films on the large projector-style screen.  Compare this to a similar drive-in diner at Disneyland in Florida which has only fiberglass replicas of retro cars!  Our little one loved pressing all of the dials on the aqua Chevrolet behind me in our pictures, and luckily all the front panel buttons are permanently "frozen" :)

My 1950's bra top and drive-in theaters are pretty much one and the same thing more or less in my mind because they both are associated with mid-century ways to combine fun, rest, relaxation, and outdoor family time all in one.  How perfect is that?!