I'm participating in part of the May Giveaway Day and I'm giving away one of my favorite dresses, my wedding shower dress aka a 1950's Prom Dress. 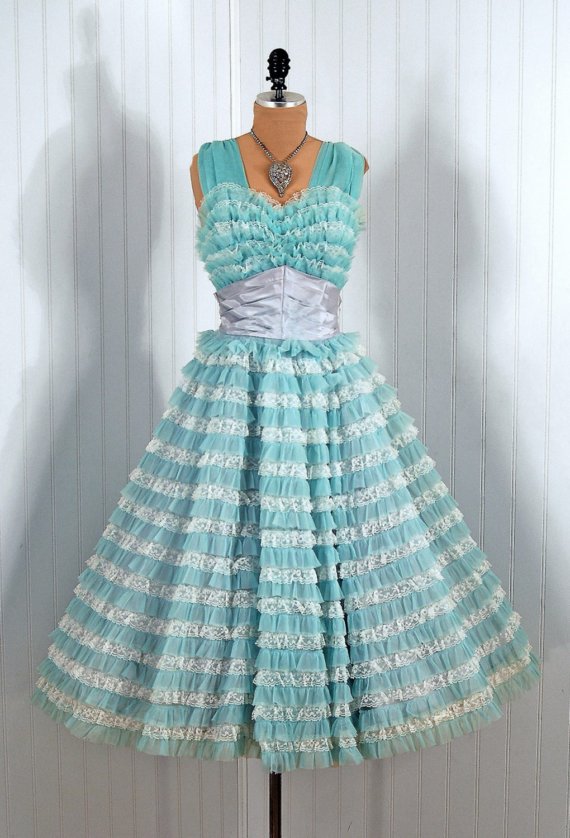 It has been sitting in my closet for 2 years and as much as I don't want to part with it, I feel worse that it's just sitting in there collecting dust when it could be used and loved by someone else.

All you have to do is leave me a comment on my blog zilredloh by midnight, May 25th.  I have more images and size information on my blog also.

P.S. I really hope it's kosher that I'm posting on Sew Weekly's Circle about my giveaway.  If not, could someone kindly let me know for future instances...

Permalink Reply by Judy Roberson on May 24, 2011 at 10:57am
That is beautiful. I know you will make some young lady very happy.

Sorry I'm asking in the wrong forum but happy to see your smiling face pop up!

It was really tough....  I've been thinking about it for a while, and I knew I really wouldn't have an occasion to wear it in the near future.  It just felt selfish of me to keep it in the back of my closet when others out there could benefit from its use.

Where'd you go on your exotic travels?  :)

Permalink Reply by Cathe on May 25, 2011 at 5:57am
I would love to know how you decide who will win. I read the comments on your blog and there are so many compelling wishes.

This really is beautiful and generous of you!

Ugh!  I didn't think it would be so hard to choose a winner!

So far I've been trying to pick out comments day by day, who I think would 'benefit' from it most.  (Low income, rough family situation, etc.)  What also stands out to me, is the fact that someone would pass it along once they're done and not just hoard the dress for themselves.

It's really tough... But I'm happy there are so many kind people out there that seem happy to be "just considered" for it.

That's actually a really sweet thought, people wanting to pass the dress along, maybe that's part of the stipulation so others can enjoy it.

Do tell how you make your final decision!

Permalink Reply by Cathe on May 26, 2011 at 6:41pm
Liz, I have been following your blog faithfully to see the outcome of your beautiful dress give-away. I think it has ended perfectly! I am so happy with your choice, not that that would matter but I truly stepped into your shoes and read the comments and thought wow these are such compelling stories how do you ever decide. So, well done and thank you for the drama and happy ending! It really is perfect!

﻿﻿﻿﻿Hey Cathe! I wanted to be sure I stopped back here and followed up with you.
It was really hard to decide. I compiled a list of about 10 of my favorite comments. They were a mix of people who I thought had very compelling stories, those who shared my sentiment and I felt connected with, or those who I thought would be most benefited by receiving the dress.

I did have my husband read them to help me confirm who I thought the winner should be. He had really good thoughts about who to include/or remove from the running. It was difficult because I really 'felt' for others who were in tough situations. And while my dress would have cheered them up, it wouldn't solve their problems.

So I ended up picking a person who I felt was a mix: I felt like she immediately understood what I was trying to do and shared my sentiments about vintage clothing. She was also sharing a tough situation with her partner and his lack of job. And she also had a purpose for the dress.

Thanks for lending me some moral support! :) I was really worried about upsetting those people who didn't win, but everyone was very gracious and happy with who I choose. So I think in the end, it all worked out.

I do have to say, I'm not certain I would run another giveaway this way, but for what I was giving up it made the most sense.