An interesting facet of fashion history is the rather quiet and not so well known area of what is the first layer, what goes hidden -and often forgotten- under peoples' clothing.  I personally would consider it a good thing to bring back at least some of the beautiful and practical vintage lingerie, especially tap pants (or tango shorts  and French knickers as they are also called).   There was, and still is,  an easy decency, discreet fashion, and happy practicality about these pairs of little culottes, especially for under skirts.

Tap pants hit popularity, among many reasons, on account of being worn by tap dancers doing their routines...ladies of the 20's and 30's wanted their legs to 'sell' (help them get coveted dancing roles) and their bosses could only see their nimble moves with short culottes.  Just watch Ginger Roger's solo tap routine in the movie "Follow the Fleet" if you want a classic use of tap pants. (click here to watch the movie's clip)  I would almost, but not really, love to strap on my tap shoes and do a photo like Ginger in that movie.   Tap pants were also an ingenious way to allow women to be much more active while still wearing skirts and dresses.  They were cute enough that, if seen, it wasn't too shocking of an issue.  As tap pants are really underwear,  I will let this one post be lacking a model ;) NOTIONS:  I already had ivory lace floating in my stash, had the thread,  plenty of sharp needles, 1/4 inch ivory bias tape, and small metal snaps. I even used one of the buttons leftover from making my 40's satin blouse.

PATTERN: Past Patterns No. 501, Ladies and Misses 1920's Combination Undergarment

THE INSIDES:  The back center seam is a lapped seam, the waistband is bias bound, and every other seam is a french seam. Perfection! 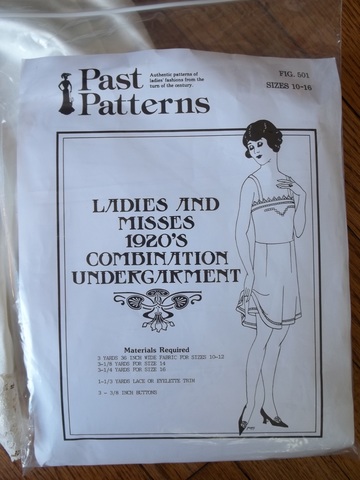 Excuse the wrinkles...they're actually a good sign.  I  do wear these quite a bit, and not just with my vintage fashions.

I can't say enough about how much I liked this pattern.  It was simple to put together, easy to change/adjust,  fits amazing, and -best of all- cut on the bias.  The pattern called for there to only be two seams, one down each hip, but I added a seam to the center front and back so I could adjust the fit better and also add a back placket, like most historical tap pants.  For my placket, I sewed seam tape (for added stability) into the top 5 inches of the back top center seam, then tuned it under, sewed it down, and stitched on the snaps.  At the top, where the placket and waist meet, I added a small button with an elastic loop to make sure the placket stays closed. The pattern calls for an elastic gathered waist.  I didn't want the bulk of that type of finish, so I opted for the 1930's hip clinging, waist skimming fit.  I was inspired to do this, as well as the placket detail, in good part from Leimomi Oakes Sew Weekly post and from what was on display at an exhibit at our History Museum (see pic below).  You'll have to take my word for it, the fit of my tap pants turned out beautifully! 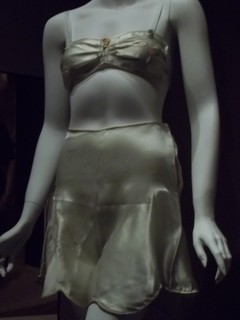 A good part of the short completion time was spent on adding the lace, but it was so worth it.  It was not hard to get a professionally finished look.  I made a straight stitch along the thicker, curvy edge of the lace so I would have it tacked together.  Then I set my machine to the smallest stitch - the button hole stitching- and took my time following and covering my previous path.  When I was done, I cut away the excess satin covering up the underside of the lace.  Much of the RTW slips and lingerie don't even bother to finish off their lace edges this well. 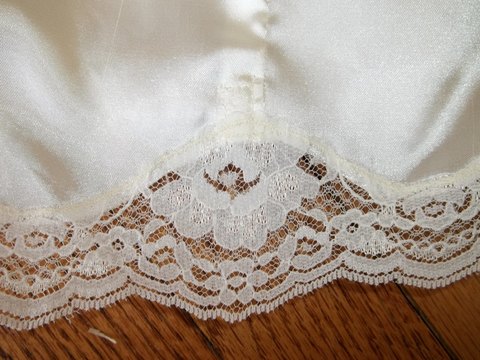 The crouch seam was the only real tricky part.  However, with some forethought, it is nothing to fret over.  Maybe the fretting was completely my deal because I'd never sewn a crouch seam before.  I've sewn everything else under the sun but not a single pair of shorts or pants.  Now I can rack up another small 'first time'. 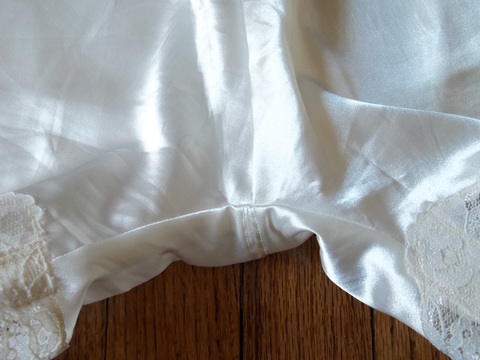 Look for some upcoming blog posts of some of my recent 20's fashions.  I will have these on under my period attire (not to fuel any imaginations) so I can feel authentic, learn about history, and be truly vintage both under and out!

P.S.  There is an interesting article about the history of undergarments in the just released 'Vogue Patterns" magazine.  It's quite a nice overview!