It's time to highlight an inventive fashion oddity from the past.  No, the three-armhole, wrap-arounder, Simplicity #7572 "Jiffy" dress pattern was not meant for ladies with three arms...just for the modern woman on the go.  In the blink of an eye, this dress is on and ready to be worn as is for and easy, breezy look, or accessorized in a myriad of ways for countless different options.

I maximized on the countless options of this wrap-arounder dress by going through the extra thought, fabric, and time to make my version reversible.  Two looks in one easy dress, in one simple pattern piece, using a small amount of fabric!  This is my first reversible clothing creation, as well as the first pattern I've used from my mother-in-law's pattern stash which I now keep.  Although the instructions for Simplicity #7572 lists a date of 1967, the envelope says 1968 - and, considering it to be from '68, would make it my third project from that year (click here for #1, and here for #2).  My #2 1968 dress is also coincidentally very close to being reversible, as well, while my dress #1 is another "Jiffy" pattern.

As far as versatility goes, this dress design banks in on the ingenuity factor, quietly offering a seamstress endless opportunities for creativity and ingenuity with a seemingly mellow pattern cover that is not fetching, just curious.  Maggie at "Vintage Core Patterns" made herself a cute version of Simplicity #7572.  My hubby and I have come up with a plethora of ideas ourselves for this pattern, so I have a feeling I'll have some more creative variations of the 60s wrap-arounder dress in my future.  Looking at some comments on this subject in the internet blogging world, interesting variations of the three-armhole dress have already been thought of years ago.  Both of the blogs I mentioned in the paragraph above ("Woof Nanny" and "Patterns from the Past") have some comments at the bottom of their pages that are left by people who made these wrap-arounder dresses when the patterns were first released.  One comment said their three-armhole dress pattern was made to be a full body apron to cover their Sunday best clothes, while another comment said it made an easy-to-get-on dress for a girl with a cast on her broken arm.  Many of the comments were remembrances of how the wrap-arounder dress was their first clothing project for 'home economics' class in school.  Read the comments for yourself and be amazed, like I was, at how such a simple design brings back memories and brings out peoples 'creativity.  It's a shame these innovative wrap patterns are generally unknown nowadays! 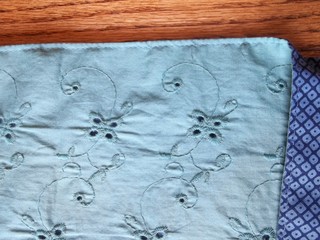 FABRIC:  As this dress is reversible, it took two different fabrics: 1.) a cotton, embroidered border eyelet in a dusty aqua color, and 2.) a printed quilter's cotton which has a solid blue on one side and a navy basket weave print on the other side.  Both fabric pieces are cut at just under 2 yards.  You can see, in the picture at right, what both fabrics look like in detail, and also how I lined up the embroidered border to end just above the bottom hem.

NOTIONS:   I bought a spool of dark aqua dual-duty thread.  This was the only notion I needed to make this dress. PATTERN:  Simplicity #7572, (picture at the top left) with a date of 1967 on the inner instructions and a date of 1968 on the envelope.  I chose to make view 2, the mid-length version.  I can tell from the markings and cuts that the pattern had been made up in the mini length version, and, as this comes from the stash of my mother-in-law, I wonder who in the family made and wore their version of Simplicity #7572.

TIME TO COMPLETE:  Making the pattern up exactly as instructed, I can see this dress being a 3 hour quickie project.  However, leave it to me to make this harder!  I ended up fitting the dress at the armholes somewhat (I'll explain more down later), and the reversible part of the dress took extra cutting, top stitching, seam turning, and pinning time.  Altogether, I think my version of Simplicity #7572 dress was completed in 6 or 7 hours, and was finished on June 20, 2014.

THE INSIDES:  What insides?  All the seams (which aren't many) are, well, tucked 'inside' both fabrics because my dress is totally reversible.

TOTAL COST:  The aqua eyelet fabric has been in my stash too long for me to remember when I bought it or where it came from, so I am counting it as free.  The cotton quilting cotton for the other reversible side was bought at Hancock Fabrics just recently.  Thus, between buying the one fabric and the one spool of thread my total cost for my dress is under $10.00.

The size of the pattern is a medium, and I really needed a small, so I correctly estimated I would have to do some fitting to trim down both the appearance and fit.  First, I cut out and sewed up the two different fabrics like two separate dresses making no changes to the pattern whatsoever.  The pattern piece is one, gigantic rectangular style shape which you cut on the fold to end up with six total armholes.  See my two pictures at left (pardon all of our son's toys in my layout picture).  Every two armholes get sewn together after a small shaping dart is sewn into each one of the 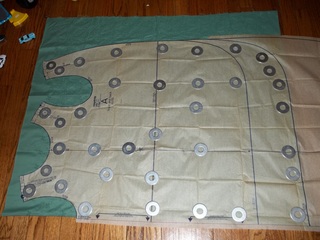 six.  After this stage, I was able to try on a single layer of fabric and realize where and how much to bring in.  I ended up taking in my dress, just like a giant vertical dart, from the center under arm down to an inch above the bottom hem.  This made (more or less) three giant side seams, and I had to do this adjustment exactly the same on both fabrics.  Personally, I took in all the darts at 1 1/4 inches for the first 5 inches down under the arm, then gradually tapering down to nothing, for a total of 3 3/4 inches taken in from the bust and waist of the dress (see picture below at left). 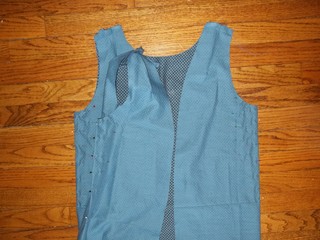 Next, the two fabric dresses were joined, right sides together, and stitched all along the outside seam...all the way across the neckline between the three armholes, down the two vertical edges, and also the long bottom hem.  My pin box was maxed out!  A small gap was left open at the bottom hem to turn the dress right sides out and turn the edges.  Then the same edge had to be top stitched all the way around again!  The last step was to measure and turn in the raw edges for the three armholes and top stitch them together, too.  The inner raw edges and the side darts I added for fitting are actually quit invisible through the eyelet holes of the aqua side of my dress.  All you see is the nice contrast of the dusty colored blue through the stitched openings of the eyelet.

Wearing this three-armholed wrap-arounder dress is a process as creative as the pattern itself.  Depending on how you initially wrap it on yourself, the third armhole of the dress doubles up on either the left or on the right shoulder, to "anchor" the dress closed.  The third armhole can end facing in front or in back of you, as you can see in the envelope cover above.  Anyway you wear it, you will always have two armholes/shoulders on one arm.  See my pictures below.  On the right, I've switched sides.  On the left, I'm demonstrating how the dress gets wrapped on by wearing only two of the armholes without the third.  We had to take this picture at home :)  If I wanted to wear the dress so that the third armhole opening would end facing the back, I would put it on exactly the opposite of how you see it in my picture.  (We didn't get a picture of that...it felt indecent.)  It took me a small amount of experimenting with the dress itself to understand completely how it gets worn, so if you don't understand my attempt at an explanation, you're fine!  You just need to make one of these dresses for yourself! 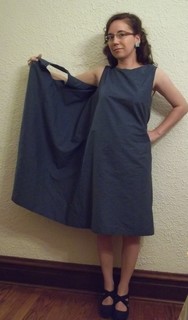 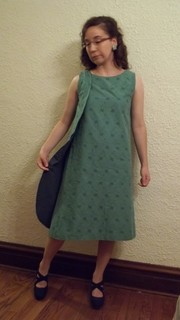 As if I haven't said enough good things about my wrap-arounder dress, I would like to add one more.  I was reluctant to use my aqua eyelet to make this dress, for after saving in my stash for so long I wanted to make the best possible project.  I did realize that trying to be the very best is me trying too hard, so I went ahead and used the fabric anyway because wearing it is always better than sitting for more time in the basement stash.  My husband also made the point that this Simplicity 7572 dress stays true to the engineer's K.I.S.S. (Keep It Simple Stupid) principle, being practically a solid 2 yard cut, so if I ever do decide to make something else with the fabric for my dress, I can do so easily.  Read how I also followed the K.I.S.S. principle here.  How's that idea for "reuse and recycle"?!

My outfit is matched perfectly by some retro aqua square clip-on earrings I found recently at an antique mall for $1.00.  I figured on stressing the pre-70s fashion of my late 60s dress by wearing my funky navy blue "Crown Vintage" brand wedges, which were a Christmas present from hubby.  A blue suede flower pin from Hancock Fabrics closes the wrap dress' flap in most of my pictures.  I can't wait to find more on hand to match and compliment my unusual retro creation.

Innovation is everywhere.  Most of what we wear, and posses, and enjoy is a product of someone's inventive idea.  We just need to keep our eyes open to see, appreciate, and spread such creative ideas, such as the 60s wrap-around three-armhole dress idea (or see my post on knitwear).  It's fun and worthwhile to let those creative juices flow!