With Vintage Vogue #2787 dress having an S-shaped front, that letter can here stand for words such as 'stunning style', but I can also unfortunately use the words 'skeptical', or even 'stifling'.  Once, however, I accessorized my dress, wore it out to a few events, and even received a few compliments, the 'stifling'  and 'skeptical' part faded away.  Who couldn't help feeling like a movie star in a vintage dress that looks like this?! 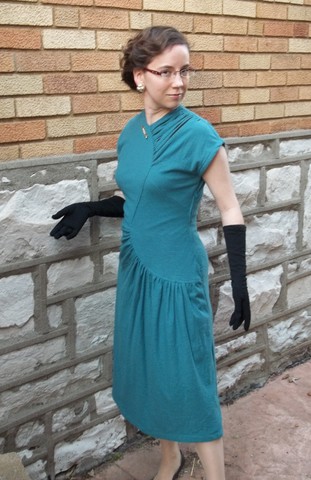 FABRIC:  The fabric that you see on the outside of my dress is a sheer, slightly nubby, cotton knit with a beautiful drape.  Its color is on the border between a blue and a green, but it is a heathered turquoise tone.  There was only 2 yards of this fabric.  As the lining, I used a poly double knit in a darker turquoise color.  Even though a poly knit makes my dress a bit less historically accurate, I had reasons for my choice that get explained below.

NOTIONS:  I only needed to buy another spool of thread to finish this dress.  Everything else - the thread, interfacing, hem tape, and a zipper - was on hand already, bought about a year ago (which was when I matched up the pattern with my fabric). 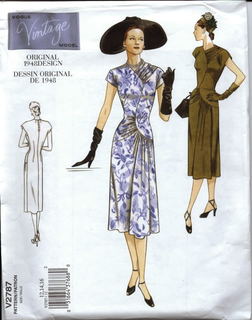 TIME TO COMPLETE:  My dress was practically finished and wearable on October 25, 2013.  However, I was not happy or comfortable with how the dress looked or how it felt on me, so I piddled with minor details on it off and on through winter (which was the next 5 months).  I finally quit working on it and planning to re-fashion it in March of 2014.  Thus, at this point, I really don't know or remember how much time was put into my final dress as you see it in our pictures.  Maybe 20 hours?  Maybe more.

THE INSIDES:  The insides are as nice as could be with all the unusual points of the styling.  Since both my dress and lining fabrics are knits, they don't ravel, so I merely zig zag stitched the edges.  The bottom hem is quite pretty with turquoise lace hem tape covering the raw edge (see picture).  The side zipper had to shortened, but I covered the raw cut end in more lace hem tape.

TOTAL COST:  After being in my stash forever, the nubby knit is being considered free.  I had bought the poly lining knit (like I said above) about a year ago, with all the other matching notions, so I can only give an estimate of $15, more or less.

I had been wanting to make Vintage Vogue #2787 pattern for some time before I finally got around to using this turquoise knit from my stash towards my dress.  A solid color truly brings out the best in this pattern, making the most of the beautiful front design.  Why disguise such a unique styling with a patterned fabric...all your work goes unnoticed, otherwise.  Who wants that? 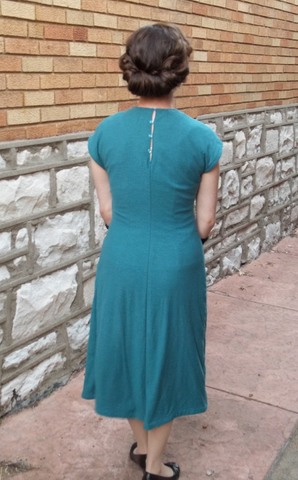 This 1948 dress is an excellent example of a transitional time in fashion history.  The fact that the back is basic and plain, with the front having all the attention, is classic of WWII dress rationing ideas lingering into post-war times.  It's like a party in the front, with all business in the back.  Gathering was also popular and widely used in many wartime fashions for women, especially between 1940 and 1946.  Yet, at the same time, the slimming, modern, glamorous appearance of the silhouette this dress creates prefigures the Dior "New Look", which was just beginning its wave of popularity since its debut in '47.  An odd mix of both WWII and Dior's 50s style is balanced in this Vintage Vogue 2787.

My fabric had been a "white elephant" in my stash for so long, being a thin, almost transparent, nubby knit in a small two yard amount.  I never really knew what to do with it...until I came across VV2787 - a vintage style that calls for a small amount of yardage.  Yes!  I chose a poly double knit as the lining fabric, only because it was both the closest matching color and because it had a softly fluid drape which matched my dress fabric.

As is my norm, many reviews and blogs were checked before beginning laying out the pattern.   Adey's blog on Sew Weekly has a an excellent review, but I especially love Viola's review on her blog Brentwood Lane.  Viola's comment about the fit of VV2787 having a full bust, small waist, and moderate hip was so helpful, and I'm glad I followed it.  For my dress, I went down two sizes in the bust and down one size in both the hips and waist, because, 1) I'm using a knit, 2) on account of Viola's review, 3) and from reading the finished garment sizes.  As much as Viola's recommendation of decreasing the gathers on the shoulder sounded good, I stuck to the pattern after all.

Since I enjoy doing gathering, putting my dress together was a fun and interesting project.  I have mentioned this fact before, when I posted about other 1940's frocks that I have made in the past, such as this 1946 dress or this bow-neck dress.  At a certain point, I did use a few choice words when I wasn't getting the gathers just right, and I had to unpin my fabric for the 6th time.  Yes, patience is a must for sewing!

I was so very precise with all the markings and cutting because I wanted to achieve the exact look of the cover drawing.  The front pieces were indeed very interesting shapes which made for some hard thinking to imagine how it adds up to the finished look.  At first, I found all the makings overkill, and I actually left a few off, but, as it ends up...YES...all those markings are really there for a reason and VERY important to properly assembling this Vintage Vogue.  It was necessary for me to go back and chalk the marking in that I had left out.  I don't see too many patterns like this one, where there's so many spots for marking that all the geometric shapes are used - triangles, circles, squares, and spots. 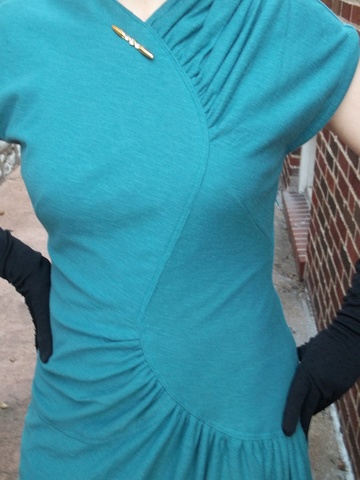 The S-front lapped seam down the middle front has a tricky crossover part.  Above the bottom half of the gathers (that come from the hip), where the lapped seam peters out into a non-gathers at about the hips, the flap switches from left on top to the right on top.  Top stitching supports the corners, and it really took some hand turning of my machine to set in my stitches just where they needed to go.  I made sure to nicely tuck the one corner under the other so both those supporting stitches didn't show and there wouldn't be a hole there, either.  Inside, this crossover corner spot was also supported further by some hand stitches and a small patch of iron on interfacing.  See my picture of the inside out below at left.  The interfacing patch inside is the best thing for this tricky spot - it keeps everything nice and tight and sturdy so it's ready to hold up for many washings and wearings! 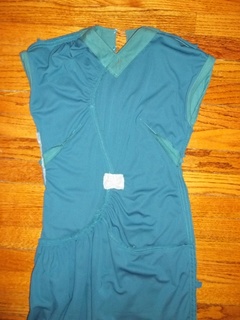 I did have a slight problem with the pattern, or at least the instructions.  The inner neck facings were never really figured out exactly the way the instructions said to sew them.  Instead of making the front neckline facings in one piece, like many patterns have, this dress' facings are two separate rectangles.  I couldn't figure out if I should sew the two pieces in a vertical center seam, or if I should overlap the two facing pieces, and which side (right over left, or vise versa) I should overlap.  Overlapping the one side

over the other was the method I chose to join the two front facing pieces to make as one, so as to connect with the back facings before sewing to the neckline.  The back facings were, indeed, quite nice with no problems (see the right picture).  Hand-stitching holds down the facing edges to the lining knit only.  Originally I had planned on doing self-fabric loops down the back neck opening, but I left them out when the facings were sewn down.  The instructions said to make thread chain loops for the buttons, so I thought I would go ahead and try another new skill.   Thread chain loops were time consuming but I like what I ended up with...so it was worth the time, even though I'm not that impressed. 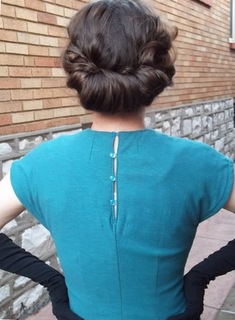 Please notice the four buttons I used for the back neck closure.  An exact match to the color of my dress wasn't found, so I went with a pretty contrasting color - a light blue.  There was no one home with me at that time,  so in order to decide, I had laid out a few button options on the kitchen floor and waited to see which one our little dachshund picked out with his nose.  (I got a picture of this...see below right.)  The buttons are vintage, coming from my familial stash, which dates back to hubby's Grandmother.  However, I really don't think the buttons are as old as the 1940's, although I don't know for sure one way or another.  It would be very much appreciated if any reader has any info about the "Streamline" brand buttons, or the dating of the card with its logo.

Anyone who is claustrophobic, or even occasionally or slightly so, might indeed have a problem with the high, almost choking neckline.  I myself have been toying with the idea of unpicking the whole top half of the whole darn S-front and refashioning it completely.  "The Slapdash Sewist" blog author has a wonderful idea for re-fashioning VV2787, and it can be seen by clicking here and going about to the middle of the page.  If my dress ever gets re-fashioned, I would want to change it into looking like the expensive MaxMara Saks Fifth Avenue dress which is shown as a close "modern" comparison.  See picture below at left.

You can also see on her blog the nickname I have found to be thrown at this Serpentine 1948 frock - "the coffin" dress.  I have seen more than one blogger stamp this scary nickname, and, to think about it, you do button and zipper yourself into the dress like a fancy straightjacket, with only your arms bare and free.  (The "coffin" name also refers to the fact that the dress' back is so plain, just as if all people would see of you is the front, just like someone laid out.)  Once I stopped thinking about my dress in the light of the nickname, and actually thinking and feeling skinny and glamorous in it, the S-front Vintage Vogue is not bad at all.  Design wise, it might be a bit lacking in full creativity, as with the plain back - a sort of cheapness which can be seen in many modern clothes.  No doubt it has its' own share of faults which don't appeal to some, but, overall, I think it is definitely fun, different, and (as long as it gets loved and worn) worth making.  Hey, being able to wear something you handmade is better than having a bolt of fabric sitting in the basement!

In the spirit of ignoring the dress' faults and feeling glamorous instead, I posed for some fun, but dramatic pictures while my hair was all fixed up and my long beaded gloves were on me. 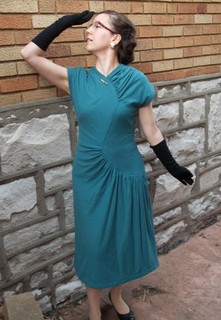 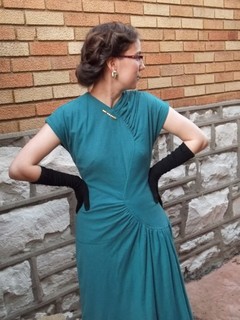