Here is my lovely but late post of the garment I made for the 1960's Challenge (week of November 25th).  I actually made this on time for the challenge, but, sometimes life gets in the way of sewing and I couldn't find time to muster my writing skills and add my post.  Better late than never! 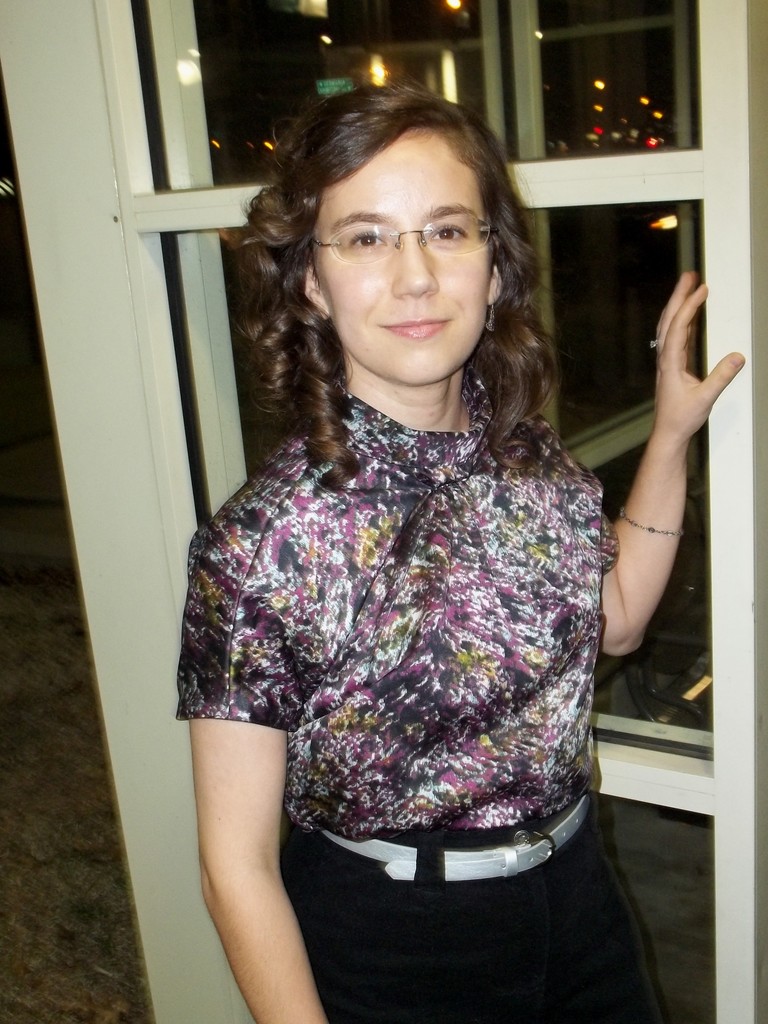 I really enjoy wearing this blouse much more than I expected. I can tell by the fact it's taken a trip through the wash machine already.

FABRIC: 100% polyester silky print in a psychedelic mix of mostly black and magenta with lt. blue, white, and green in between ($10 or under); small remnants of cling-free lining (to avoid using static guard at every wearing) in a pastel rose color

FIRST WORN: to the fabric store from which I bought everything for my blouse-I wanted to show the ladies there what I did with what I bought:) and do a night time photo shoot.

TIME TO COMPLETE: 8 or 9 hours; finished on November 27 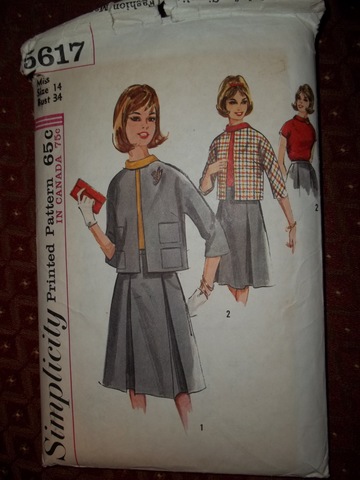 I bought and then made this pattern within a month or two.  Usually it takes me LOTS longer to get to a specific pattern, and I have plenty of patterns-matched with fabric- ready to sew together.  There were four reasons for my promptness: 1) it would be my first true blouse with a collar and buttonholes and the whole bit; 2) it looked super easy with only 3 pieces for the blouse; 3) my mom said she remembered having a blouse with a backwards collar like this when she was my age; and 4) it was perfect for the Challenge!  Actually, I had a hard time sticking to just this pattern, since just the week before I had the opportunity to buy 35 patterns, dating between 1955 to 1970, all for a few dollars!  Now I can't wait to make more 60's styles from my collection.

Sewing this pattern together was so easy I almost didn't need the directions.  I read through the part about the back button placket several times, but it still was unclear and rather confusing...at least for me.  My husband has a self-placket shirt (the kind without a separate piece to be sewn on for buttonholes), and it was easier for me to look at his shirt and just make my back placket exactly similar.

The long, bias bust darts were easier than expected.  Even the collar points and collar interfacing came out better than I hoped.  It was quite hard to sew the collar to the blouse-the polyester was not 'stretching' well and I really had to pull and clip it to fit nicely.  Another favorite feature are the sleeves.  They are loose and very comfortable for my larger upper arms with the lack of conventional shoulder seams.  The bias tape sewn along the hem (then turned under as per instructions) makes a stiff, round look which compliments the design.  Its a shame you can't tell any of this by the envelope picture.  The drawings show the jacket on, except for an almost worthless tiny right corner shot. 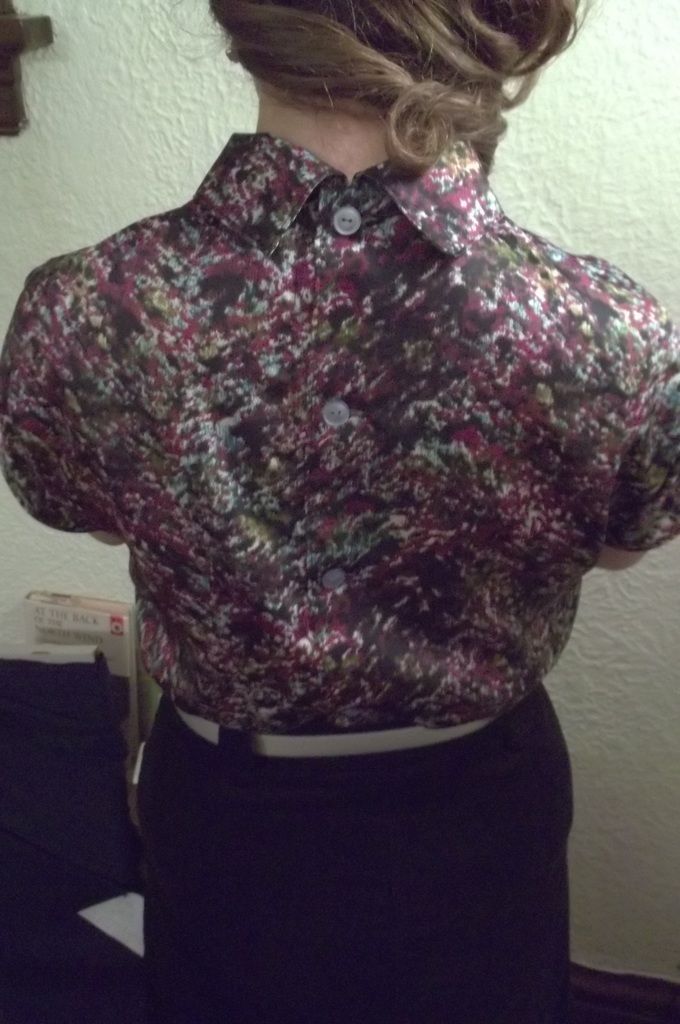 Making the buttonholes required a sort of "field trip" to my parents' house.  I needed to use my mom's Bernina.  She has the fancy Swiss-made machine with everything on it and my old Singer only does straight stitch and zig-zag.  I think this might have been my first buttonholes, at least since many years, and...WOW...it was fun!  The critic in me wants to say I could've somehow done better (such as sewing in cord or something), but the buttonholes seem strong enough, so, I'm really proud.

When I finished the blouse, I realized the bust was huge...and I mean really big, so that I wondered if it was the wrong size.  As a fix, I promptly sewed up the sides a bit, and re-sewed the darts into generous concave darts so as to grab in more from the front.  However it was still big.  The front, under the collar also looked strangely plain and lacking something.  Bingo! I had a light bulb come on!  I thought of a favorite turtleneck on mine, one that has some gathers, only a few inches long, centered under the turtleneck fabric.  I made only 2 or so inches of gathers about an inch or so down from the collar, then tacked it in place with bias tape behind (inside) to keep it from coming undone.  Doing my gathered fix did wonders for the blouse. The gathers hide the long darts in front, pull in the excess fabric right where it was too big, and totally liven up the look, making it more modern with more interest.  The picture below is our attempt at a close up. 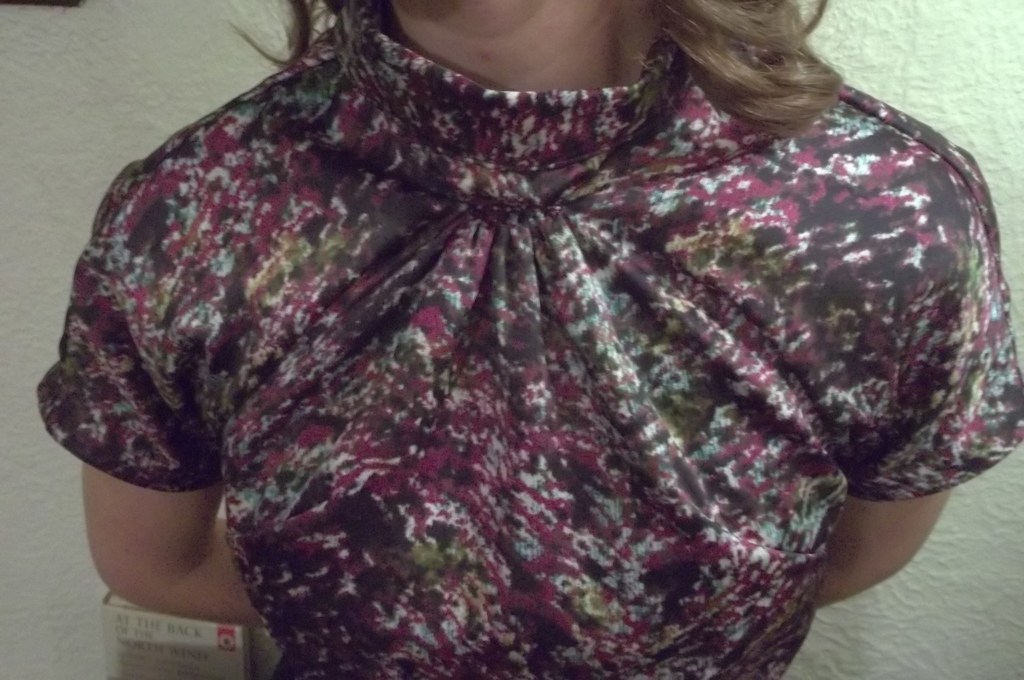 My title is a reference to one my absolute favorite songs of the 60s decade, "Remember...Walkin' in the Sand" by the Shangri-Las, released in 1964.  I grew up with this song, hearing my mom sing and play it since I was little.  We often had fun with the "Remember.." chorus by adding our own phrases to suit any occasion.

However, seeing the pictures of my photo shoot outfit does remind me of the Shangri-Las with their "tough girl" reputation and their preference to wear black leather pants and vests for performances. 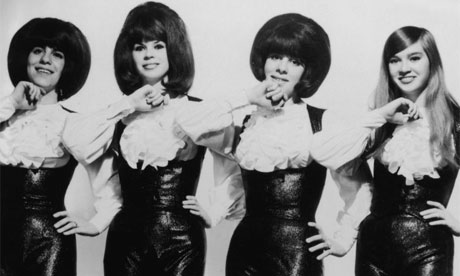 When I found out how popular they were in '64, I enjoyed reading up on the Shangri-Las.  The 2 twins and 2 sisters group had no major moral shocks - just a career with the best of their era.  There is a rather funny story of how they got in trouble with the FBI for 'transporting guns across states'-supposedly for self-protection while on their tours.  They were, after all, only minors of 15,16, and 17 when their popularity started...and they had problems with a crazy devotee crawling in their hotel window.  The two twins died too young, but Mary Weiss (the blond) and her sister have moved on to other successful careers.  I would have never imagined Mary as a New York architect self-business owner! 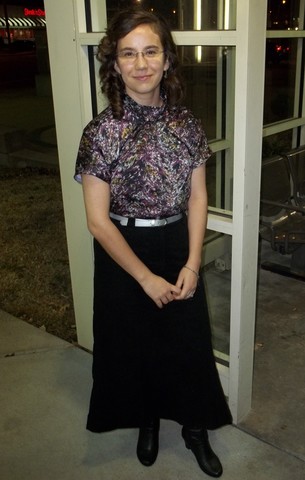 I could have worn my leather skirt (yes, I have one, and, no, I didn't make it) with my blouse for a closer imitation, but I don't want to raise any eyebrows, so my black corduroy skirt with my high heeled boots matched fine.

Night time was a challenging way to take pictures, but fun and completely my idea!  Our first night shots were taken at at local bus terminal.  My husband kept telling me to relax, so I think I wasn't posing too well at first.  How could I when it was so darn chilly outside?!  Below are my funny outtakes, for good measure. 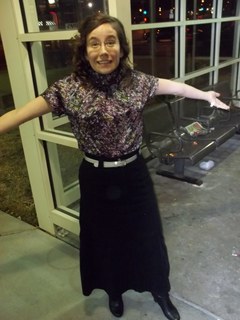 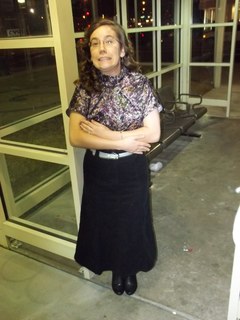