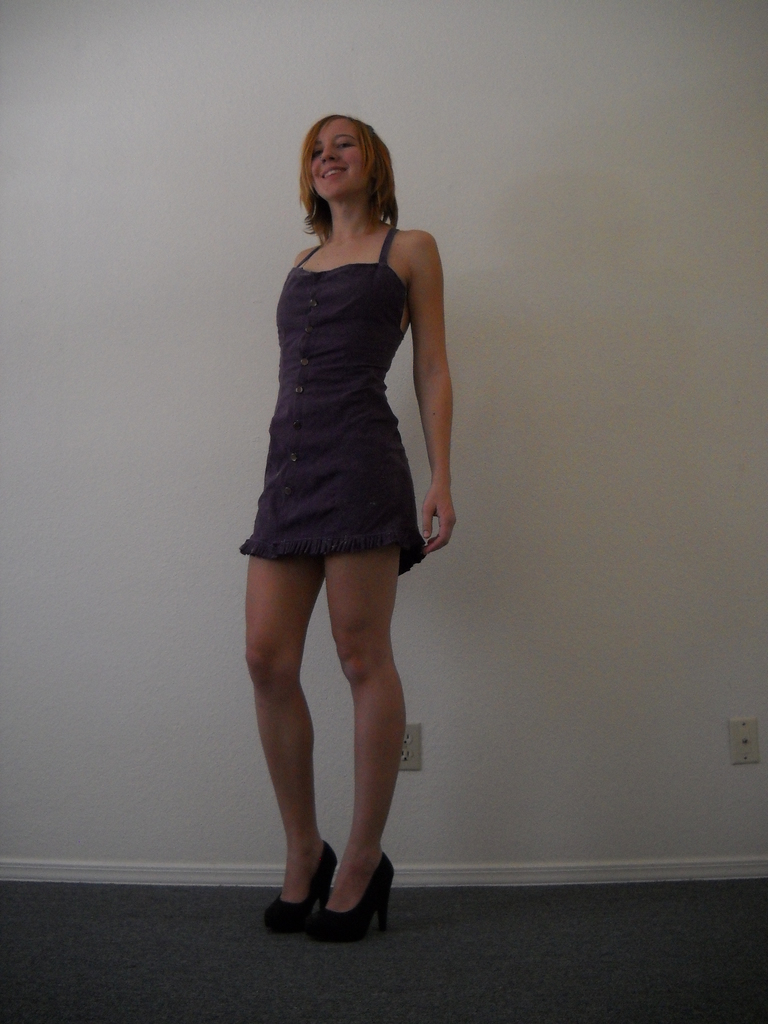 I seem to be stuck in sewing mode the last few days; thought about leaving this until the buttons challenge, but I'll just make something else with buttons then. This is my second accessory project; I actually made this before the accessory challenge, but it worked, as it was inspired by this pair of boots, http://ak1.polyvoreimg.com/cgi/img-thing/size/l/tid/41641876.jpg/qupid_puffin_06_taupe_burnished/thing?id=41641876 /, which I own but are for some reason missing. I am terrible at keeping track of things, really. I mean come on, giant platform booties with a gargantuan heel? How the heck do you lose those in your own house? Anyway, the dress was intended to give a neo-Victorian/steampunk feel without being too costumey. I wore it to the first Friday artwalk in my city, and for an electronic concert that night; it's supposed to be a little off beat.

This was my first time doing buttonholes and pleats, not to mention this kind of bodice. The bodice part looks really strange and freaky from the back: 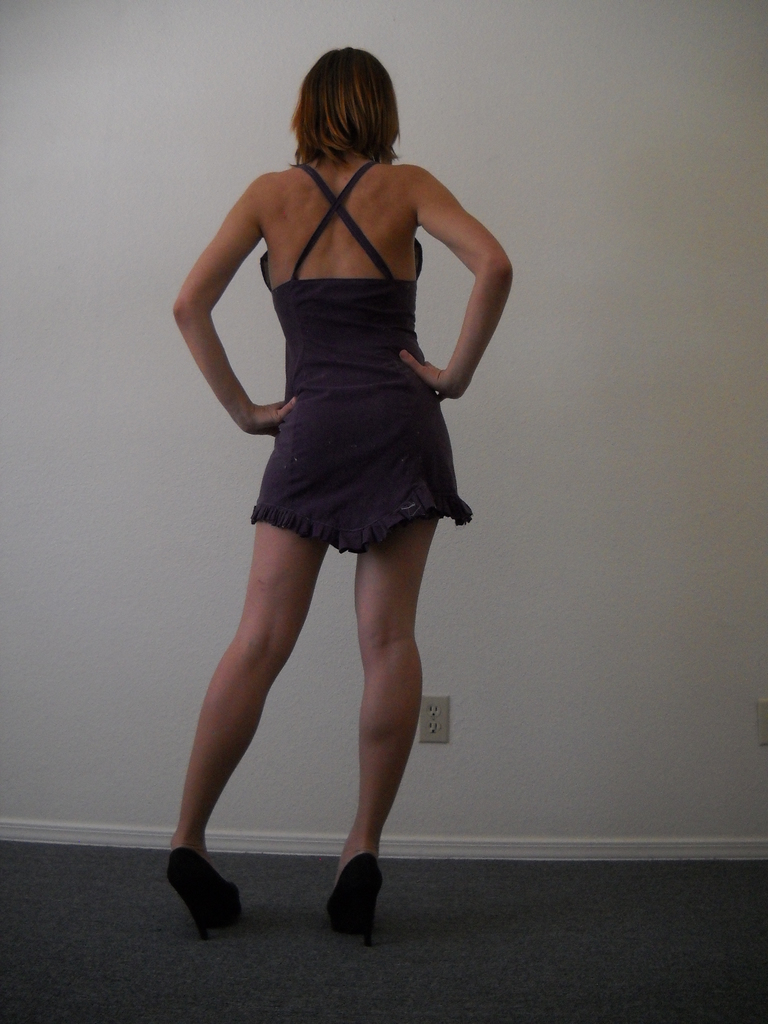 The buttonholes aren't great either, but that's because I have a really bad habit of practicing new skills while working on a garment that I plan to wear in public instead of, say, a muslin. Same thing with some weirdness in the pleating; I wanted really stiff knife pleats to achieve a crisp bottom edge, as opposed to a soft ruffle, but I don't have a good way to make a lot of pleats evenly. Also my tape measure is missing, (no doubt cavorting with the boots!) so I had to eyeball the circumference of the skirt to attach the pleats. One of the strips ended up really weird as a result. I did manage to make the hemline swoop down slightly in the back, like I wanted, and had bigger, softer pleats in the back, going to really small, stiff ones in the front.

One thing I'm really proud of is the fit; it was achieved with bias cut side panels, which I'm unreasonably excited about. To the point of trying to explain "bias cutting" to my non-sewing boyfriend and friend just to let them know how awesome it is. Not pretty.

I wish I’d had matching thread, instead of light purple. And I wish I’d had thicker thread in purple at all, instead of turquoise, for the buttonholes. I was also going to add a pop of color to the insides of the pleats; my mother also had this gorgeous saturated yellowy orange that looked amazing against the purple, and I wanted to have that on the inside of the bottom hem, where you could see it nestled in there when I moved. But alas, after Christmas, I left the orange behind at my parents’ house, and none of the oranges I had lying around looked anything except awful on the purple. Alas. But I am otherwise quite pleased with the way this turned out. I just wish my boots would show up. 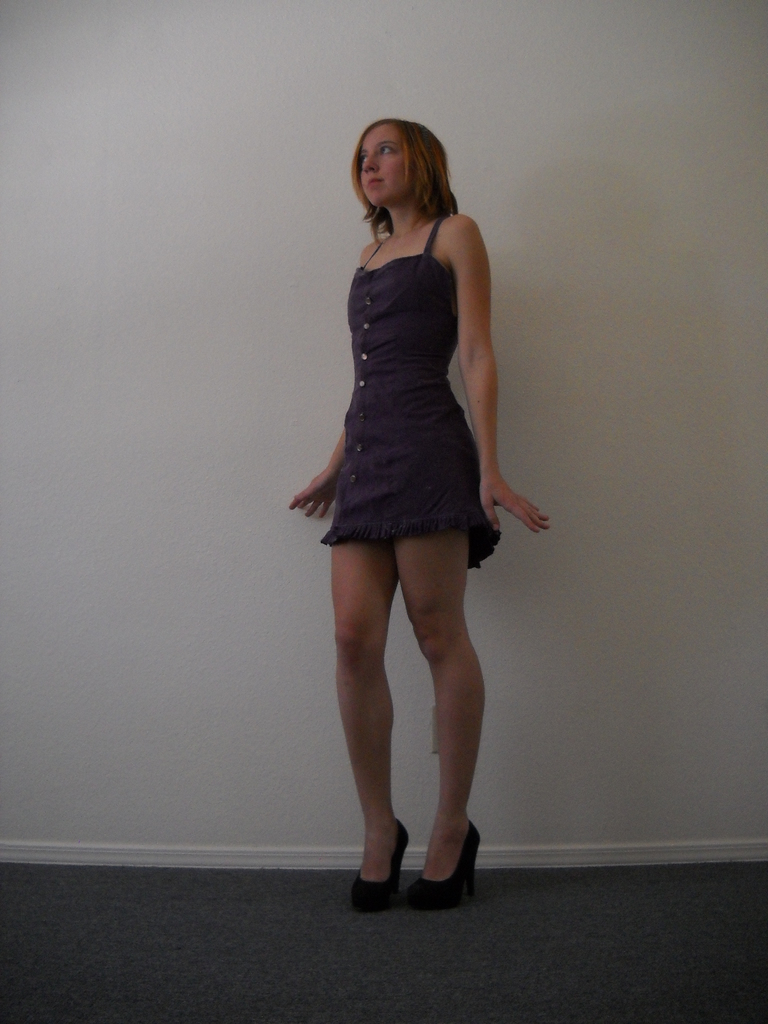 "Oh. No, you didn't, wall. Just back off, ok?" A.K.A. I apparently make disgusted faces at things when I'm trying to anticipate the self timer on my camera.