"Oh, You're My Favorite Color - Camouflage"

Brad Paisley certainly has something there with his 2011 hit song about "Camouflage".  The lyrics are ingenious and literally right on - "...You can blend in in the country.  You can stand out in the fashion world. Be invisible to a white tail (deer), irresistible to a redneck girl."  There is even a verse about a mom that knew how to sew, and did a favor for her daughter's prom night.  Listen to the song and read its lyrics at the same time by clicking this link.

Under these sentiments, I made a fashionably creative yet still deceptively disguising modern camouflage dress.  This was a tricky and challenging project on account of the fabric's design and fiber content.  However, camouflage has something of a personal connection to an interest I share with my dad because of his job, so I am very glad to have succeeded in making this unusual and fun fabric into a garment I love to wear.  As Brad Paisely refers to in his song, camouflage was certainly designed "by Mother Nature and by God", but mankind also has altered camo into something to be used for our own needs, as well, especially since the 20th century.  The many nations involved in WWI probably helped define the word itself.  A Google search of the word camouflage reveals that the word's meaning is a loose mix of French (thieves slang) meaning 'whiff of smoke in the face' and an Italian word for 'to disguise or deceive'.

I hope that my modern camouflage dress presents a wonderful mix of purposes: a fashionable, not-so-conventional use while still being totally useful at attempting a disguise, a la military or animal style.  See?  In the picture below, you see me in my dress posing normally.  Later on, you'll see me attempting some backyard disguising and orienteering! 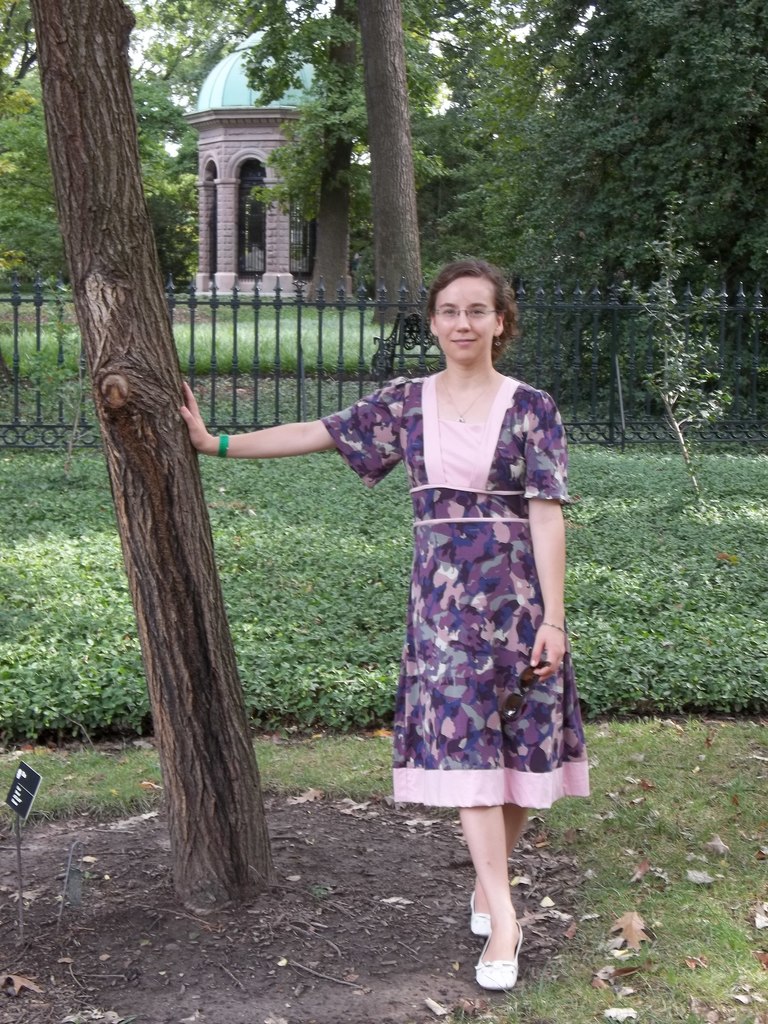 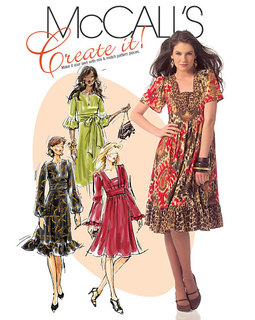 FABRIC:  2 1/4 yards of camouflage in a brushed finish rayon knit - it's super soft, drapes well, and stretches easily on account of the small percent of spandex in the fiber content;  1 yard of light pink cotton jersey knit which has slight shimmer/sparkle to it because of tiny minute sliver dots all over the right side.

NOTIONS:  none were bought; I had all the thread and interfacing which was needed on hand.

TIME TO COMPLETE:  my dress was finished September 30, 2012 (yes, two years ago), and I don't exactly remember anymore how much time went into completing it.  My closest guess is 15 hours.

FIRST WORN:  to an event held at our town's Botanical Garden for the weekend of Labor Day.  In the picture above, notice behind me is the elaborate mausoleum of Henry Shaw.  My dress was finished in the early morning hours on September 30 (2012) and, after sleeping in and getting ready, worn later in the afternoon of that same day to the event.  I received my first compliment that same day also, from one of the booth vendors.  Wow...my first compliment in less than 24 hours after being finished with my dress is a pretty good turnaround for myself!  This is also my go-to dress for any military type of events, such as air shows. 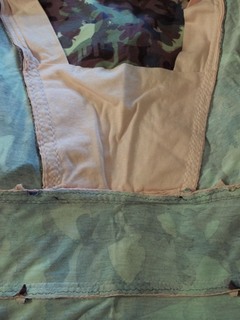 THE INSIDES:  fairly decent but not perfect.  As my fabrics were non-ravel knits, I merely zig-zag stitched the raw edges together while the seams are double stitched in a rather loose 'lightening stitch' to give the fabric room to drape and stretch.  Last year, meaning 2013, I had lost some extra "baby-weight", and needed to take in the sides a good amount, so the side seams are slightly more bulky and in my way now more than what I intended.  There is a small bump in the sides where the waistband, with the pink piping, was brought in, while under my arm there is a large seam allowance now after I had unpicked the sleeve and re-sewed everything in smaller.  I just didn't have the heart to cut the excess fabric...at least not yet.

TOTAL COST:  I don't remember anymore.  The camo knit fabric was bought in 2010 or 2011, and the matching pink sparkle knit fabric was bought at a Hancock Fabrics store in 2012 for around $7 (more or less).  Thanks to a wonderful employee, whom I've known for years, I was given some wonderful ideas and advise to help me with my project and find the beautiful pink fabric we both chose to go with my camo print. 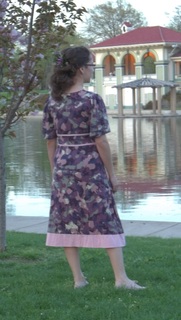 Camouflage prints to me are on par with peacock items (see this post) or dachshund dog stuff or French fleur-di-lis things (see this post) - all of these always trigger something in my head that says, "I love it! I want it! What is something creative I can do with it?"  This explains why I bought the camo fabric, but I no longer remember where it was purchased.  I only remember just two yards of the fabric was bought because I knew the print was too busy to stand on its own without a fill-in matching/contrast.  However, I slightly disagree with one point in Brad Paisely's song, the one where he says "ain't nothing that doesn't go with camouflage", because I had the hardest time of any project (yet) finding a fabric to go with my camo.  I also had a tough time picking a pattern to make with my fabric, as well.  I know I went through several picks, such as McCall's 6200, but they all ended up eventually getting pushed out of the way for the pattern I did use, #5704.  My final choice of everything is something I'm very happy with - the pink contrast brightens and feminizes the camo, while my pattern chosen helps define my waist and slim down a print which could've made me look bigger.

This project was the closest cut I have don

e, or will ever hope to do, with my sewing in regards to laying and cutting out a pattern.  The way the envelope back goes for McCall's 5704, is that you pick out exactly what features you want, and each piece has its own measurements to go along.  I chose almost all of the features on the cover model's dress, with the exception of a plain skirt and un-gathered bottom band, and added up all the 3/8 and 1/4 and such measurements to come up my total for fabric needed.  The fabric on hand was close to my total amount needed, but still shockingly short.  Nevertheless, I figured with such small pattern pieces, no nap (one way print), and pure luck, I could...AND DID...make things work.  Actually, I had to fudge in one spot at the top left corner of the bodice where it joins to the shoulder (see picture at right).  I didn't realize there was no fabric underneath at that spot; but, no fuss!  I cut two small 2 inch squares to fill in for the shoulders on the bodice front and it actually looks cool with those patches there. 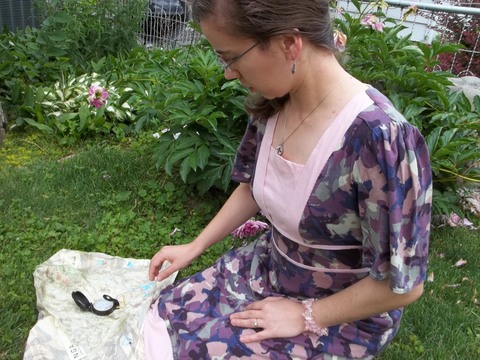 There were only a few personal preference changes I made besides the ones mentioned above, which were made out of necessity because of my fabric shortage.  The rectangular inset of the neckline was cut out at about 2 inches higher than the pattern so that it wouldn't be so revealing.  Also, the pink piping in the seams above and below the midriff panel was my idea.  My dress needed something to define the waist and highlight the panel pieces which went into making the design.  I didn't add any rope or piping into the piping when I made it from the leftover pink knit because I just wanted to keep things simple and not hinder the stretch of the knit.  The K.I.S.S principle (Keep It Simple, Stupid) wins again!   See this post for another of my examples of the K.I.S.S. principle in action.  Now, if only I could remember a simplistic way to keep everything I learned about orienteering straight in my head, my map skills would be better, too.

The loose, flowing sleeves of my dress are a feature I especially love, mostly because they're so very comfy and feminine.  Maybe the 'feminine' part of my dress is caused by the slightly sparkly pink fabric.  I'm not a very 'pink' type of girl, but in the case of my camo knit dress, it is quite enjoyable to make a new color work for me. 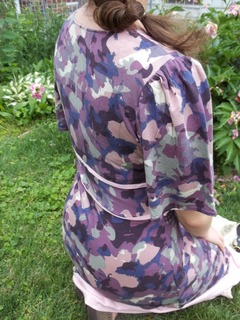 As for doing more projects in camouflage, the answer is "Yes, Yes, and Yes!"  I already have 1 yard of the large splotched deep browns, tans, and olive colored "Desert Storm" Era camo in a lightweight knit, and

this will hopefully be made into an interesting top.  (See picture of US Army shirt for a "Desert Storm" camo.) I also have a soft cotton twill in a smaller print, lighter toned camouflage, which is paired up with a pattern for a casual cargo pocket skirt.  However, both these fabrics (the knit and the twill) have been in my stash for at the most 10 years, so at this rate, I might not get to make something from them anytime soon.  It took me a few years to just get around to posting about this dress...Vintage takes up a good part of my sewing projects.

Historically speaking, camouflage came to be recognized and named around and about the same eras of which I sew, specifically the 20s to 40s.  In the late 1800's and the early 1900's several artists, zoologists, and scientists brought greater attention to the verb part of camouflage in in natural and animal world.  Once we fought through World War I, troops suddenly realized that marching (or riding) into battle in full decorated and obnoxious glory might not be the best of ideas if conquest means survival is necessary.  The 2011 movie War Horse presents a good example of undisguised battle fronts.  The emergence of aerial history furthered the awareness and need (when it came to WWII) to gain experience in the art of hiding things in plain view.  There is a very excellent blog, in five parts, that expounds on the history of camouflage; it can be found here at "The Believer Logger".  Please take some time out and check it out because I can guarantee you it's well written interesting, and not too long. 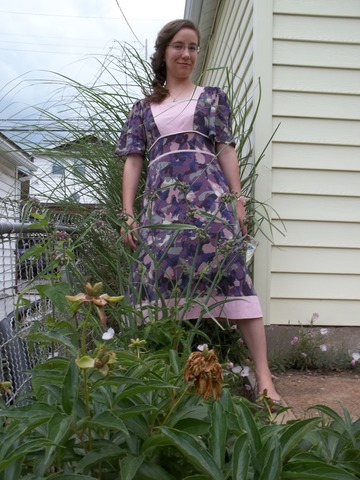 I will conclude with my favorite lines from the history of camouflage blog at "The Believer Logger".  "Camouflage wasn’t only, or even primarily, concerned with hiding. It was also about being seen: confusing the eye, subverting reality, asserting both individuality and group identities. Camouflage is a pattern, a collection of conflicting verbs, and a surprisingly multivalent worldview."  Indeed.  I also know there would be a hole in the history of the military, of hunters, of fashionistas, and many others without a pattern that is as adaptable and mufti-faceted as an amoeba.

As a teaser, my dad and I actually have the idea to personalize our camouflage in the future.  My dad's workplace nickname is "The Camo Man", and, after all, he is a mapmaker.  How great would it be to combine a few of my interests into making our own dachshund silhouette camo...just for one idea.  For another idea, I alrea

dy made a Traditional Hawaiian Lei for my hair to match with the colors and earth theme of my dress.  Stay tuned - I always have something up my sleeve!