Believe It Or Not...It's My Favorite Re-Makes

Since last year when I began sewing more often (every week),  re-making a pattern is a rarity.  I like to use a pattern piece here or an idea there, incorporating a little of every other pattern into most of my projects.  When I have a nice, full file cabinet of patterns yet to make, there has to be a real winner among them to deserve a reason for a repeat.  I like variety in my clothing, and thus my favorite pattern remakes gladly look totally different.

It actually feels quite nice to depart from vintage and explore my own modern, updated style!  Both ideas surprisingly came from looking at a lot of 20's to 30's patterns and fashion posters after the Gatsby Challenge in early September. 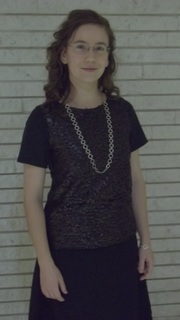 On the left I made a casual 'Saturday' t-shirt knit dress.  On the right, I made a fancy black sequin top, re-fashioned from an over sized and sloppy knit t-shirt.

FABRIC: for the dress- a thin, loose, and somewhat unsubstantial, but very soft, cotton knit and a soft beige stretch lace for back and pocket - both from stash so basically free; for the sequin top- a Michael's craft T-shirt, found in my stash, but bought about 5 years ago for $2.50, and 1 yard of sequin netting fabric, bought recently for $9 something; the chain necklace and bracelet- put together by me and bought at JoAnn's for $6.30

NOTIONS: I had proper needles, seam tape, and thread already; just bought some black bias tape for $2 or less 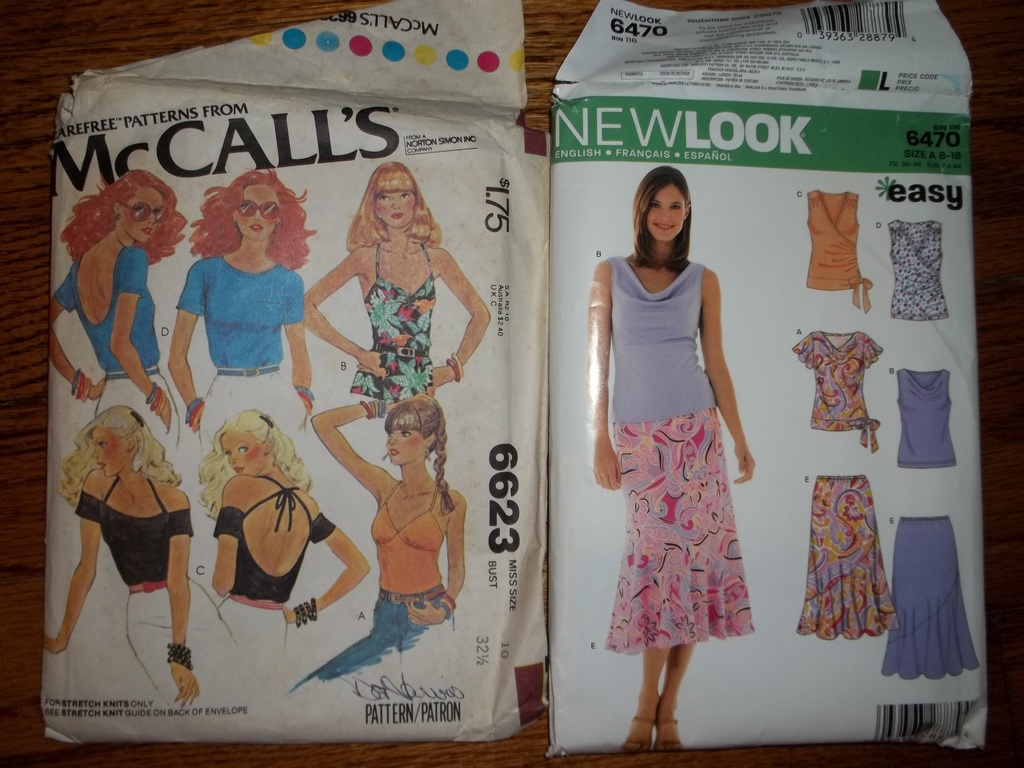 THE INSIDES: for the dress- just o.k., the seams are just zig zagged together nicely, as the knit fabric did not want to be 'restrained' too much into a nice seam; for the sequin top- I am so proud of this part!  I sewed hem tape into the shoulder seams, sewed bias tape around all the other seams, and hand sewed a line of bias tape along the inside of the neckline,  my extra work is SO worth it...because there is no itchiness! 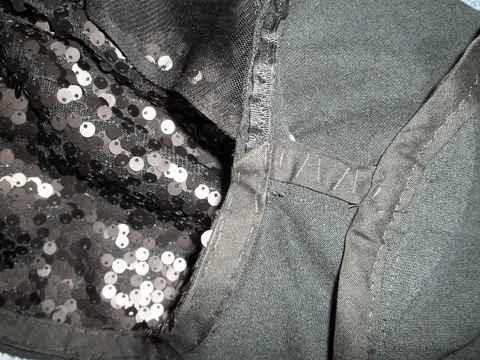 FIRST WORN: for the dress- worn on a Saturday outing to some antique malls to look for home stuff and old patterns; for the sequin top- over my Aunt and Uncle's house for a Christmas get together.  This is my new go-to fancy top for the holiday season.

For both creations I did the same pattern combo.  The New Look skirt pattern was used as a 'benchmark' for the perfect hip fit, since I've made it before.  The skirt pattern was layered over my top pattern at 1 inch below the waist, as the skirt hugs the hips a bit.  The cutting instructions were improvised by me in order to match with the layout of the top.  The skirt piece is supposed to be cut on the bias.  However, I simply folded the full skirt pattern in half to cut on the fold, coming out with a one piece dress or a great measurement for my top.  I usually don't throw cutting and grain line instructions out the window but it was a happy experiment.  Then I just did free hand grading in between...I know where I need my clothes to be forgiving:)  You can see a little of what I did in the picture below. 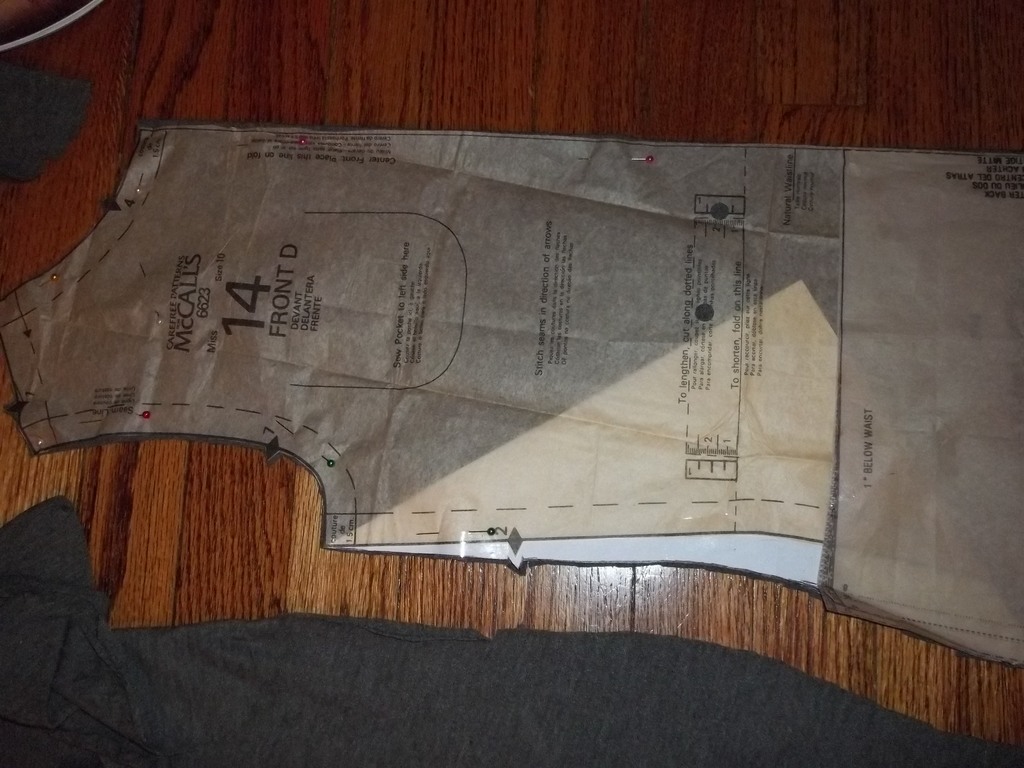 My T-shirt dress is remotely like Gatsby style day dresses that had a long bias ruffle slanted up one side of the hem.  In early fall I actually had too many nice dresses, and I needed a casual dress that would stretch my sewing wings a bit further.  When I finished my dress, I knew it wasn't my coolest project, but I felt like I could really sew anything if I tried. 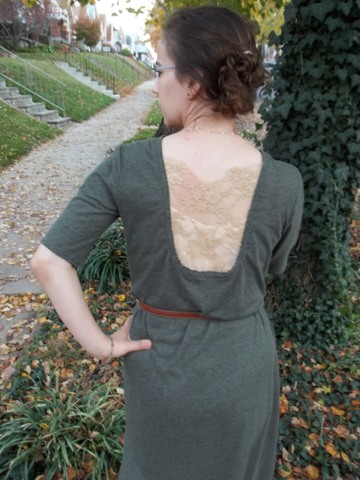 At right is my very fun back detail.  This super soft stretch lace solves any drooping of the shoulders on account of such an open back, and (I think) lends a special touch to what might otherwise be drab.  I certainly find myself not wanting to cover the back up with a sweater!  Besides, I needed a way to make a dent in a large cut of this stretch lace.  I really don't remember why I bought so much, but I am sure I'll use it in some future projects again.

Unfortunately I don't have a picture to post of the skirt I made years ago from the New Look 6470 used to make this dress.  The skirt I made then must have turned out alright since I remember a clothing store worker complimenting me, even though, (STUPID ME) I used a woven navy/white tweed for a stretch pattern.  Oh well.  I think I buried it amongst stuff somewhere in my parents basement back then when I realized I wasn't happy with my sewing skills.  I will keep looking for the skirt or a picture at least...

My black sequin top was an idea spawned from admiring a Target sequin tank, and telling myself, "Hey.. you can make your own better!"   Soon after, I found an over sized T-shirt while going through my old stuff.  Yes, I was crazy enough to buy bags of sequins and plan on (yeah right) sewing them on by hand, in a decorative Art Deco design. Below is one of the ideas I was working from: a Chanel beauty of a 20's dress. 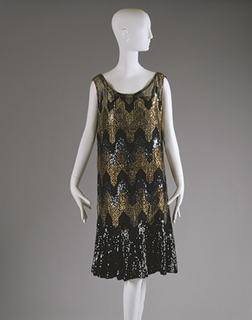 My plans drastically changed for the easier when I found a sequin-covered 'fabric' on a trip to the fabric store.  I suppose it came in for the holiday/New Years sewing.  I pulled it off the rack and couldn't wait to get it cut and take it home.  The fabric store employee might have had something there, when she hesitated to cut it, because cutting and sewing this sequin 'fabric' was so much more of a mess than any fur I have worked with in the past.  The sequins would pop and jump at every cut I made, even hitting me in the face.  Those sequins were sticking to my skin and left a messy trail everywhere I would work with my top. 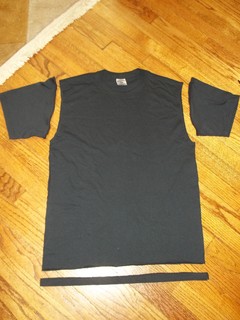 I will write this re-fashion story short and sweet.  I cut all original seams off, keeping the sleeve hems.  Then I re-cut the pattern top exactly as I did for my dress, and cut another front piece from the  sequin fabric. The sequin front piece was pinned onto the T-shirt front, then I re-sewed the whole top back 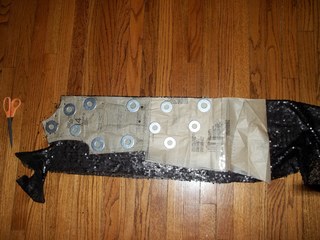 Next I used chalk to draw my own plans for the back of the dress.  I took advantage of the wide netting edge along the selvedge to fill in the open back, similar to the lace in my knit dress above. 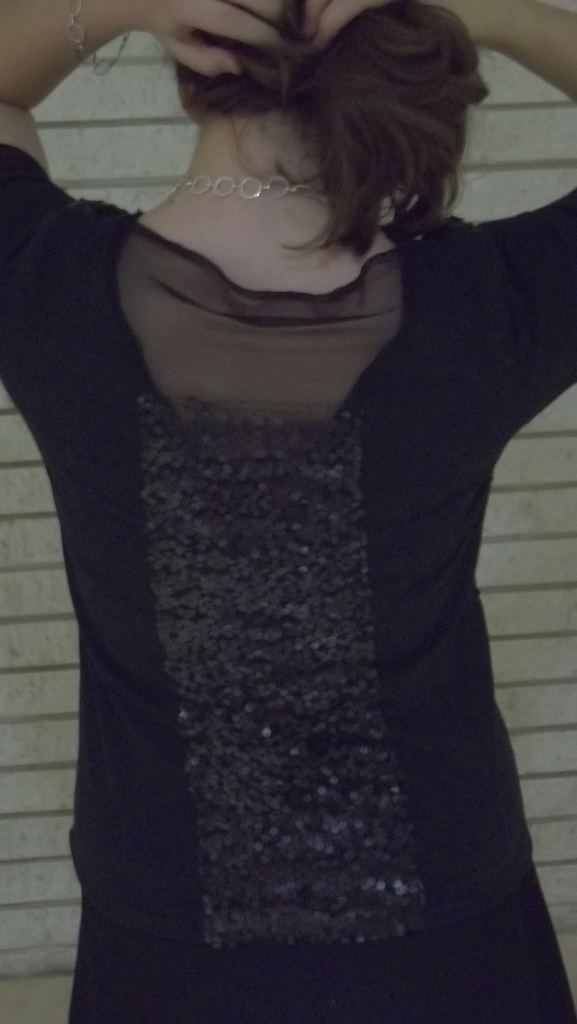 Voila!  I like how it is, as it is, so I plan on using the sequin bags for another Art Deco type dress.

I kept switching between needles the whole time I was piecing this together, using the sharp where ever I was sewing through sequins and using a knit ball point where I was only sewing on the T-shirt knit.  I hope this was right, but I don't see how I could have done it otherwise.

Here are some outtakes of me enjoying feeling like a rock star! 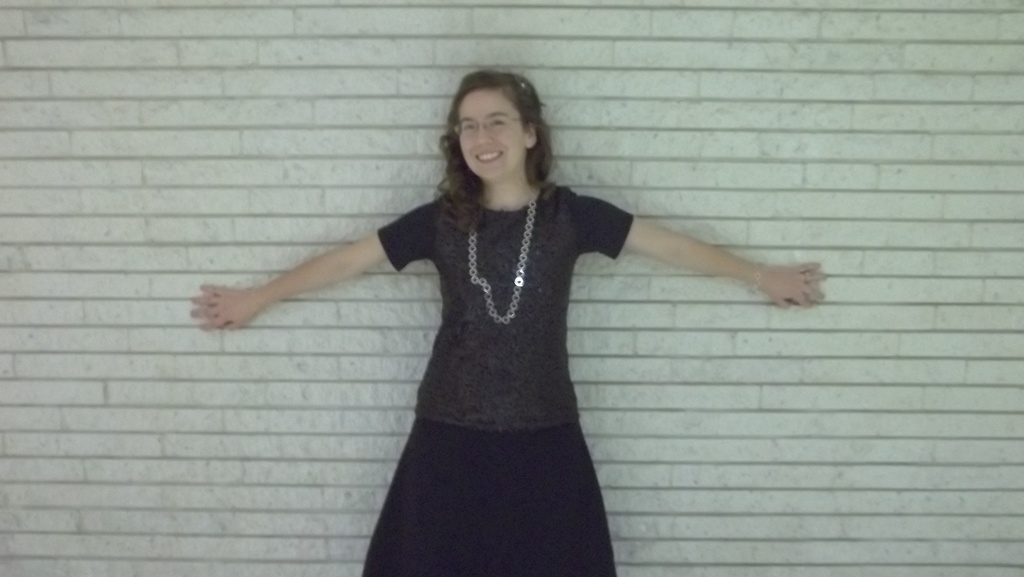 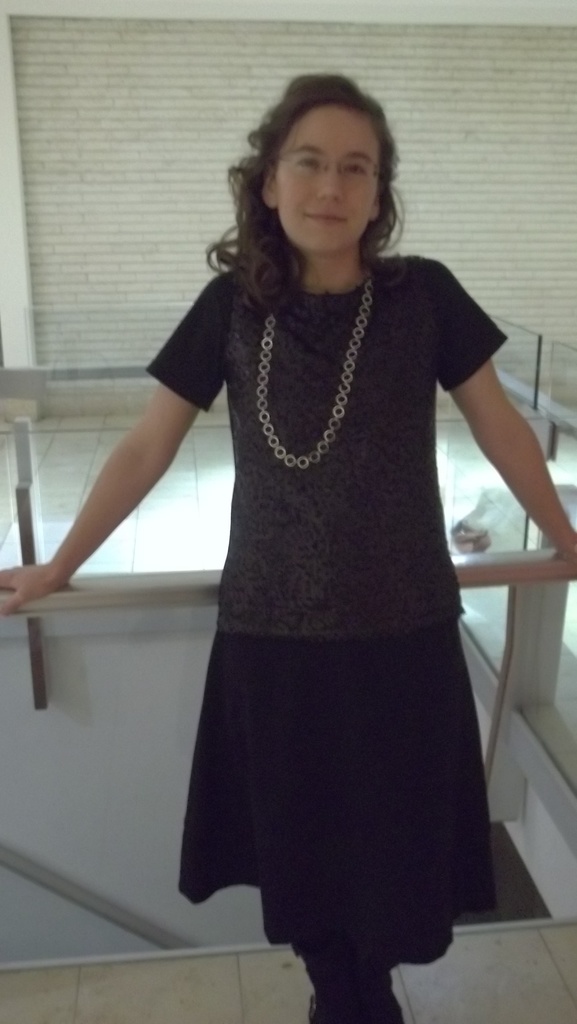 Just a little FYI :  I did a sort of funny mistake when I finished sewing this top.  I tried it on and completely forgot I had one last pin on the inside armpit seam.  OUCH!  I had one long, swollen scratch that luckily didn't bleed much.  My husband actually thought it was rather funny that my scratch was in the shape of the letter Z...the Mark of Zorro!  It makes me want to get out my old black and white Zorro movie...the 1940 Tyrone Power movie is my favorite!

If I don't post before the end of the year, Happy New Year everyone!  Here's to another great year of sewing ahead.  Cheers!