This is my first blog post on here so I first wanted to say hello to everyone and introduce myself. I'm Laura and I've been sewing for about a year and a half. I started sewing because I always wanted to make my own clothing and accessories. I basically dove headfirst into sewing without any formal training or classes so I'm basically flying by the seat of my pants but I've had a lot of fun. So without any further ado, here's a dress! So I have to admit something. I have a chiffon problem. It's so pretty and so soft and I love how it looks after it's sewn but I cannot stand working with it. One day I bought a meter and a half each of three different chiffon fabrics. Go figure. Anyway, after staring at all this fabric that I had no idea what to do with I decided that I should just make something simple. 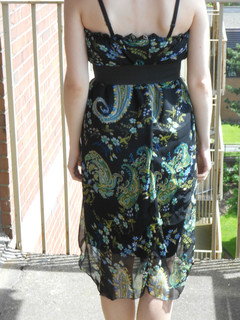 I had been drawing up an idea in my head for a simple dress for a week or so and finally got up the courage to give it a shot. The goal was to do as little cutting and sewing as possible when dealing with the finicky chiffon. What I came up with was a summery empire waist dress that would also use a plain black cotton/spandex blend I found in the remnants bin.

The whole dress came together in one evening and was as simple as I had hoped it would be. I first sewing the lining into a tube with a couple inches ease and then hemmed the bottom. Then I sewed the chiffon into a tube. After that I sewed the top of the chiffon tube to the lining tube (this is all soooooo technical). The top was made using two rows of shirring elastic about 1mm apart from each other. The first row wasn't keeping the dress up enough so I added in the second row to reinforce it a bit. Content that I wasn't going to have any "wardrobe malfunctions" I cut the excess chiffon off the bottom (I have tons left over) and did a lettuce edge to bind off the bottom edge of the chiffon. Add a thrift store belt and that's it!