It's time to highlight an inventive fashion oddity from the past.  No, the three-armhole, wrap-arounder, Simplicity #7572 "Jiffy" dress pattern was not meant for ladies with three arms...just for the modern woman on the go.  In the blink of an eye, this dress is on and ready to be worn as is for and easy, breezy look, or accessorized in a myriad of ways for countless…

Going out of your own personal comfort zone can be hard without a strong incentive to precipitate making that first move ahead.  I'm not usually alright with small amounts of clothing on myself out in public, so making a vintage bra top was a bit out of my comfort zone but it sounded incredibly fun and different at the same time.  Stephanie at "The Girl with the Star Spangled Heart" blog hosted a…

A Compliment by Contrast - My Leather and Chiffon Dress

Many times I have special vision when sighting a rather disappointing pattern envelope cover.  Somehow I can see past the wrong fabric or trims or styling that was chosen.  Maybe I can see the creative potential of patterns because I love being artistic and thinking outside the box...who knows.

Nevertheless, this leather and chiffon dress was definitely one of those surprising, creative, out-of-the-box projects which turned out to be wonderful staple I turn to wear…

"Oh, You're My Favorite Color - Camouflage"

Brad Paisley certainly has something there with his 2011 hit song about "Camouflage".  The lyrics are ingenious and literally right on - "...You can blend in in the country.  You can stand out in the fashion world. Be invisible to a white tail (deer), irresistible to a redneck girl."  There is even a verse about a mom that knew how to sew, and did a favor for her daughter's prom night.  Listen to the song and read its lyrics at the same…

pencil skirt - Play Sharp or play to be a Good Wife 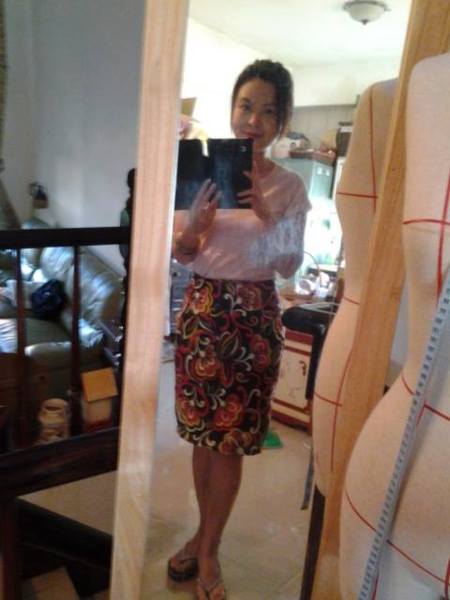 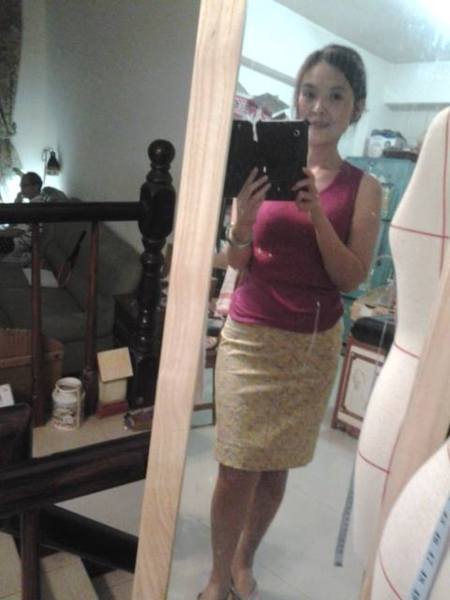 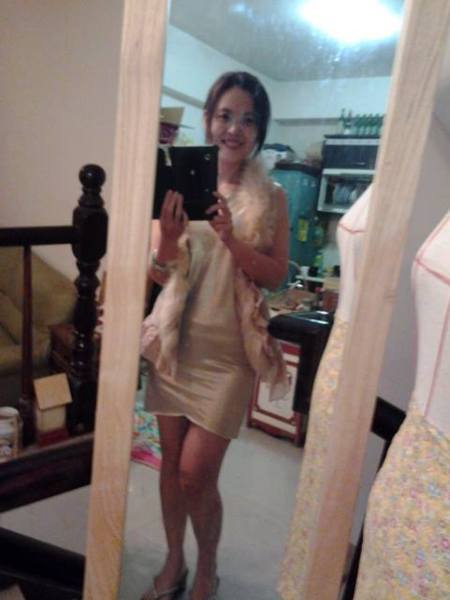 Thank you sew much,

Its my honor to have this best nana drama award,

i would like to thanks to my brother pq1500 sewing machine,

without him, i can not perform any dress...

From the bottom of my sewing heart, it make me Sew Happy.

I am sew touch to have you visit my blog constantly.

I just sew cloth together…

With Vintage Vogue #2787 dress having an S-shaped front, that letter can here stand for words such as 'stunning style', but I can also unfortunately use the words 'skeptical', or even 'stifling'.  Once, however, I accessorized my dress, wore it out to a few events,…

I have found that, for myself, once a weakness or fear is conquered in regards to a certain sewing skill, that it then becomes something very enjoyable to do.  Such good feelings happen because I end up with more confidence towards something which had been a boundary.  I don't want any walls to hold me back from what is possible.

This plaid 40's skirt falls into that rank of "confidence building projects".  I wanted this to be a very casual, comfortable, unassuming wartime…

My "Gracie Allen" Ensemble - a Casual Yet Classy Blouse and Skirt

Gracie Allen, wife of George Burns and comedic star of the Burns and Allen Show on radio and TV, is my top style icon for the 50's.  In every TV episode, Gracie always had such a interesting, beautiful, and classy outfits which fit her perfectly and displayed the very best of the 50's styling.  Of course, in my opinion she always wore great fashion styles, no matter what the era.  I would love to see all her fashions in color!  It was therefore only a matter of time before I…

Putting a Vintage Wiggle into a "New Look"

I have owned the New Look #6045 pattern since it came out three years ago, and I hav

e always adored it, waiting for the right circumstances and fabric to come along.  This past year's Fall season provided me with the time and opportunity to finally whip up my fun and versatile version of the pattern.

We chose a modern outdoor sculpture in front of…

Who doesn't love a party, especially when it involves making and wearing a fabulous frock?!  Our son's birthday celebration afforded me a very good reason to whip up a fun, fresh, and unique 1961 pattern labeled as a "party dress".  I used an old original pattern which provided me good practice at re-sizing (as it was for juniors) and an opportunity to work with new techniques by using different material.  The finished product is wonderfully feminine and my unique personal…

A Space Age Fashion Classic for 1968

The year is 1968 - our eyes were aimed towards the sky with an impending trip to the moon, and everything that was formerly deemed out of the question was suddenly a reality.  I have already briefly addressed the history of 1968 that had its impact on fashion styles in a previous post, my tapestry corduroy dress.

I have made a dress that combines two…

I am a woman of my word.  The very fact I am posting this sewing creation proves my point.  Back in our summer of last year, I had a blog post (link here) where I expounded on my version of view D from a cute 1940's pattern reprint, Simplicity #1692.  In…

Time for the Tango! My 1920's Combination "Step-In" Knickers

The new boyish silhouette that became fashionable for women and in the 20's demanded a whole new styling of undergarments. The desired shape of the day featured a flat chest, narrow hips, broad shoulders, and an obliteration of highlighting feminine curves.  Advancements in home comforts, such as heating, as well as an active lifestyle, heralded lighter underclothes with an enticing beauty and a practical down-to-earth purpose.

I have made a piece of historical lingerie…

Geometric Lines of the Times - My 20's Inspired Tunic

Here is one project that couldn't help the way it turned out!  It was one of those special garments that kind of makes itself...and in this case, that is a VERY good thing.  I merely knew what era I wanted (the 20's), knew what color (mustard yellow) and fabric (linen blend) I wanted to be working on, then, with plenty of fashion research, did whatever seemed right.  I can't lay claim to any one specific pattern or garment as an inspiration.  The finished tunic is simply my…

One of the milestones to fashion history came when the much loved knitwear came into being. I tried to channel the innovative qualities of both knitwear and the 20's style in this project.  A resale store purchase of a RTW dress, with a 'big box' store lab 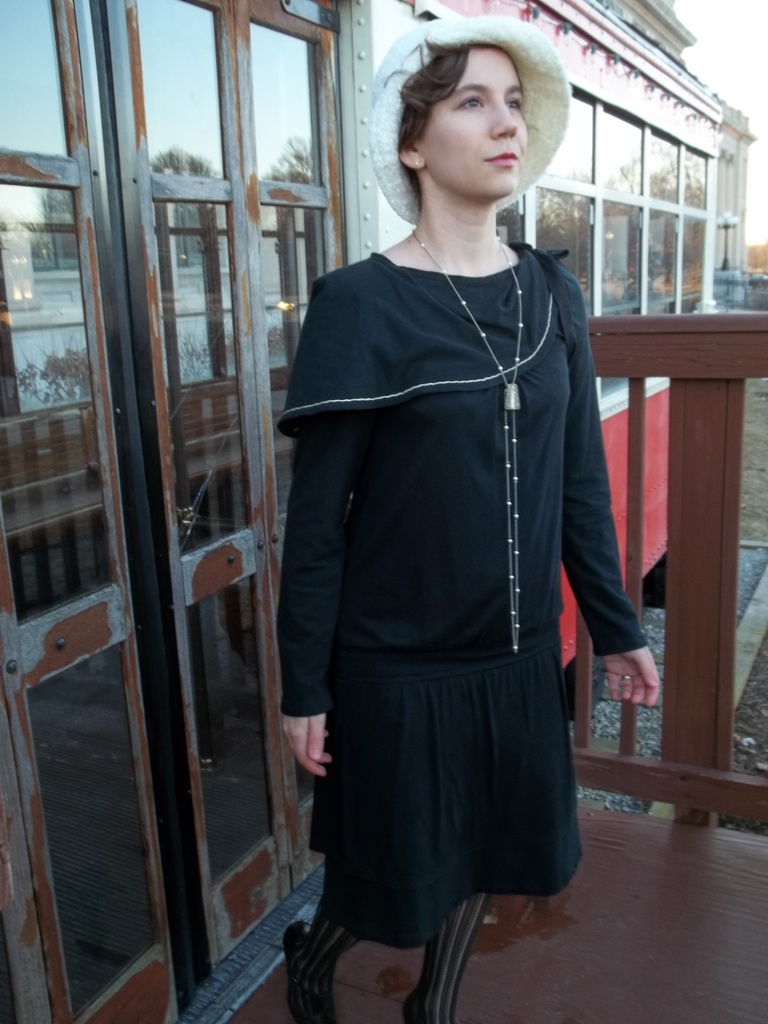 el, was transformed into a new vintage style dress reflecting the height 1920's…

What is red without green for the Christmas holiday?  It sounds like a really good duo all broken up.  I made sure the two colors of the holidays were brought together by my current sewing.

My previous post, my 1946 dress, documented a red wool dress for wearing to my holiday functions, but actually I made a deep green knit dress a few weeks beforehand.  This green knit…

This Christmas, I celebrated the season in style - handmade vintage style to be exact.  My finished dress in one of my #1 best made project, taking into account the high quality fabrics, thread, and details which are involved.

My best 1940's hat, complete with feathers, rhinestones, and netting, was worn to suit posing in my new fancy dress.… 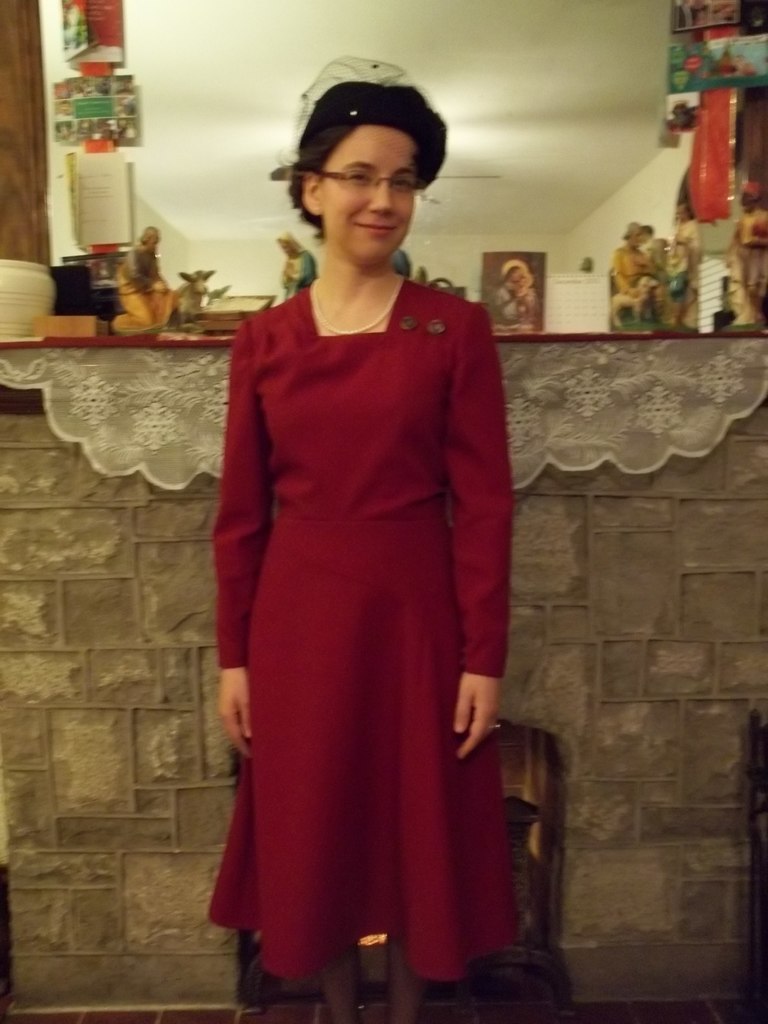 Reuse and Refashion: Silk and Lace Takes a Second Life

Not that long ago at a resale store, I happened across a small stash of 100% silk, oversized, and slightly outdated "Victoria's Secret" lingerie.  At the cheap prices they were sold at per piece I bought all of what I found, with the specific intention of refashioning, or at least reusing, the high quality silk and lace.

One item in particular has been refashioned first.  I transformed a black silk camisole into a pair of 1920's style tap pants.  Even before I checked out I…

I went to movie inspiration for this year's Halloween in our household.  Except for missing the tin man, we were the four major characters from the movie The Wizard of Oz, and, in my opinion, did a smashing good attempt at re-creating those costumes.  Toto might look a bit different, and our lion is too cute to be scary, but altogether, we made smiles from whoever saw us.…