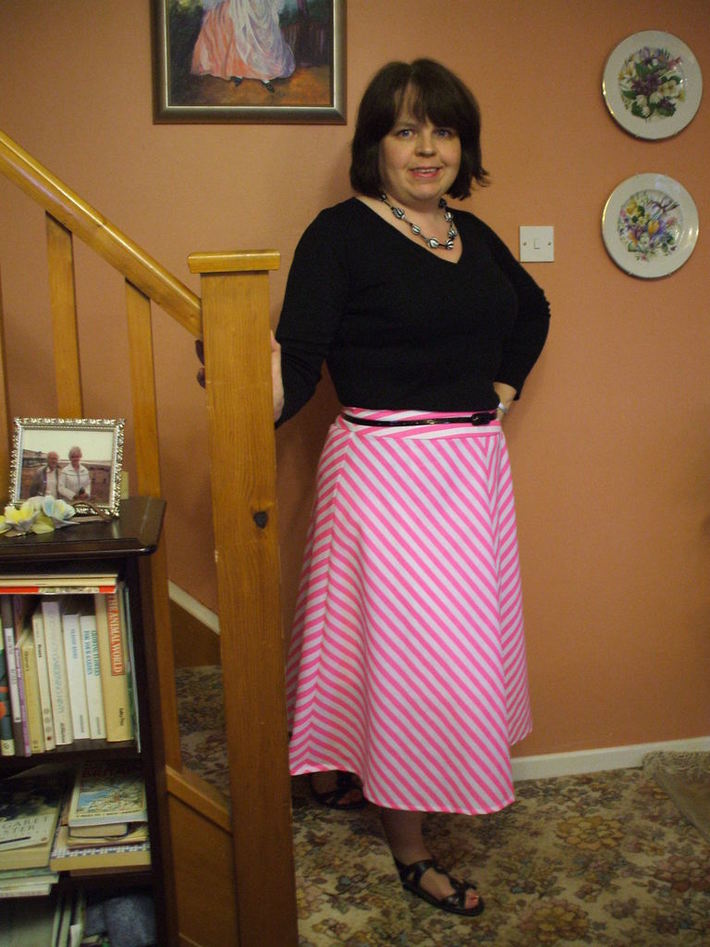 I used to love Milly Molly Mandy. In fact, when I saw an omnibus edition of the books a few years ago, I just had to get it and re-read it! The stories are quite old-fashioned and were first published in the 1920's. For those who don't know Milly-Molly-Mandy, 'She had a Father, and a Mother, and a Grandpa, and a Grandma, and an Uncle, and an Aunty; and they all lived together in a nice white cottage with a thatched roof. This little girl had short hair, and short legs, and short frocks (pink-and-white-striped cotton in summer and red serge in winter).

There is an episode where she needs a new dress and there is a trip to the village store with her mother and a friend, 'Bunchy' and her grandmother. The story goes ... 'There was a light blue silky stuff which Mother and Bunchy's Grandmother said was 'not serviceable'. And a stuff with scarlet poppies and cornflowers all over it which they said was 'not suitable'. And there was a green chintz stuff which they said was too thick. And a yellow muslin which they said was too thin. And there was a stuff with little bunches of daisies and forget-me-nots on it. Ang a big roll of pink-and-white striped cotton. And there was nothing more (except flannelette or bolton-sheeting and that sort of thing, which wouldn't do at all!). Milly Molly Mandy thought the one with daisies and forget-me-nots was much the prettiest. So did Bunchy. Milly-Molly-Mandy thought a dress of that would be a very nice change'... Anyway, it turns out that there's not enough stuff for both dresses and Milly-Molly-Mandy lets Bunchy have the pretty stuff and they become friends.

As well as the stories, I love the pen illustrations done by the author, Joyce Lancaster Brisley. She was also an artist who had work hung at the Royal Academy. I like to draw in pen myself and there's some of my work early on in my blog.

To make my skirt, I thought I'd have to get a striped sheet or something but amazingly, my village store had a roll of pink-and-white striped cotton! Have I been shaped by Milly Molly Mandy? Well, I do live in the country now and always wanted too, having been brought up in an urban area...

Comment by charlotte tilley on May 7, 2011 at 3:54pm
What great inspiration, I loved reading your story, really good choice. The skirt is really nice, you have matched up all the stripes, how clever, I am going to grill you about how you did this next week x

Comment by charlotte tilley on May 7, 2011 at 3:54pm
PS you look gorgeous, this really suits you

Comment by Jen on May 7, 2011 at 4:15pm
How lucky was that find? Perfect for your skirt and the matching of stripes is spot on. Very nice.

Comment by Cathe on May 7, 2011 at 4:36pm
What a charming story. I too would like to live right there, the place you describe, it sounds like bliss to me!

Your skirt is so fun especially as you have dressed with black shirt, belt and shoes! I think this is perfection!

Comment by Judy Roberson on May 7, 2011 at 4:57pm
You look so pretty in pink.. I am proud you liked Milly Molly Mandy..because this was Ideal for you... SO pretty... You did a great job.. matching those stripes perfectly..Great job.

Love the skirt - the pink and white stripes are delightful! Great work!

Comment by Casey Sew on May 7, 2011 at 11:03pm
Nice stripe matching and a great shape skirt. Love the story! I've never heard of Milly Molly Mandy..will have to find out more.

Comment by margueritedesigns on May 8, 2011 at 3:38am
It's great to get such positive feedback thanks!  It really inspires me to get the next project cut out - which I'm doing this afternoon!  Charlotte T - will be happy to share the stripe matching secret when I see you (it took the whole of last Tuesday evening to figure it out but I know now!)  By the way, the skirt is made from the bottom half of the Colette Crepe with a waistband from another pattern.